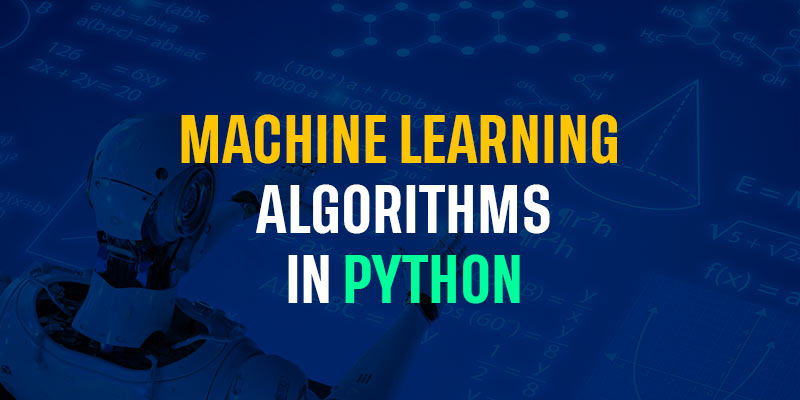 Many industries use machine learning algorithms for their business. The sectors such as Gaming, Media, Healthcare, Finance, Manufacturing Industries, Advertising, the Automotive industry, and many more.

Furthermore, there are many companies that hire Machine Learning professionals: Tata Consultancy Services, Amazon, Wipro, Apple, Adobe, Facebook, Google, Sprinklr, Phenom, Qualcomm, and Intel Corporation. To widen your opportunity you can enroll in a Python Online Course at FITA Academy providing training for the student who cannot attain classroom training can make use of this opportunity and can learn Machine learning algorithms in Python from their comfort zone.

The process of programming a machine without explicitly programming is called machine learning. Machine learning algorithms are a blend of algebra and logic that adapt to changing input data to perform better over time.

Now we will discuss the popular automatic learning algorithms used in Python, as well as their use cases and their division.

In supervised learning, the machine needs to learn the external supervision because its models are trained by using the labeled dataset. Finally, tested models are examined to drive the correct output. The main objective of this learning is to check the input data with the output data. spam filtering is the best example of Supervised Learning. Additionally, it can be divided into two categories:

To improve your Industry-relevant skills you can join a Machine Learning Course in Chennai at FITA Academy which trains the student to understand in-depth Machine Learning Algorithms under expert professionals.

Now, we shall discuss the 10 popular Machine learning algorithms in Python Programming:

Linear regression is a simple machine learning algorithm in Python which is applied for predictive analysis and helps for estimating the value of salary, sales, etc. So, you can understand the link between the independent and dependent variables by fitting the regression line. The linear equation can be represented asY= aX + b.

Linear regression can be further categorized into two types:

A decision tree is also called a supervised machine learning algorithm because it is used to determine classification problems and also solve regression problems. It is capable of working with both categorical and continuous dependent variables. The internal node, the branches, and the leaf node are described by the tree-like formation.

A support vector machine also falls under the supervised learning algorithm. The Support Vector Machine algorithm mainly focuses on regression problems. We can use a plot to represent each data item as a point in n-dimensional space, where n specifies the number of entities. SVM aims to generate a hyperplane or decision frame that can separate datasets into different classes.

To improve your in-depth knowledge of Python programming you can enroll in Python Training In Bangalore that provides the same best training for Hyderabad students along with distinguishable placement support.

Here, the grouping problem is solved using an unsupervised technique, and the Python algorithm works when there are connections between the new data point and the existing data points. On this basis, the new data points are set in similar categories. It is called the lazy learner algorithm because with the help of K-neighbours it stores all available data as well as classifies new data.

The distance between data points is measured as needed, using a Minkowski, Manhattan, or Hamming Euclidean distance function.

It is an unsupervised algorithm, which is used to address the problem of grouping. Based on the resemblances and differences, the data is classified or grouped into k different groups. Each dataset cluster is linked to a centroid to decrease the length within datasets and centroids within a cluster. This is why it is called the centroid-based algorithm. It can be used for fake news identification and spam detection and filtering etc.

It is a supervised learning algorithm because the projections are dependent on the element’s probability. Naive Bayes provides the best result for the huge amount of data sets when building a naive Bayesian model. It is mainly used for text classification. For example the dataset of weather conditions

The algorithm or equation works on Bayes’ theorem given as:

P(A|B) is Posterior probability: Probability of event A given event B

p(B|A) is Likelihood probability:: Probability of event B given event A

Itis the supervised learning algorithm. It is used for both distribution and regression intricacies in machine learning. which is used for both classification and regression problems in machine learning. The overall output of random forests is based on average or majority rating and is created from subsets of data. As a result, the issue of imbalanced datasets will be addressed.

Apriori algorithm solves association problems and helps to determine how strong and weak objects are connected. It is an unsupervised learning algorithm that is designed to act on the databases that contain transactions for generating association rules. It is mainly used in the market for analyzing the products and also used in healthcare for finding drug reactions in patients.

Now we shall see the steps that involve in solving the association problems:

The principal component analysis is used to reduce the dimensionality of the dataset, which contains characteristics that are related to each other. This involves the statistical process and with the help of the orthogonal transformation, we can convert the related features into a set of linearly unrelated features.

It is one of the commonly used tools for exploratory data analysis and predictive modeling. PCA applications can optimize power allocation in multiple communication channels, movie recommendations, and image processing.

Recent Post: Phonetics and phonology – Understanding the sounds of speech