Phonetics and phonology – Understanding the sounds of speech 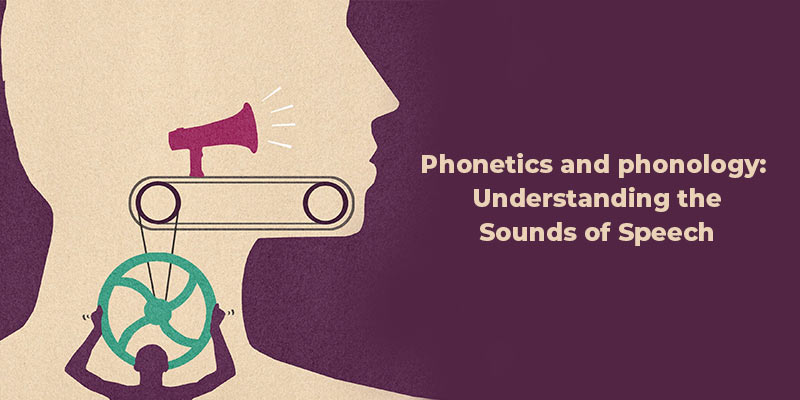 English is the international language for communication as well as the language of this planet because English has a great influence in the fields like business, education, IT, science, technology, etc. It can be described as a pipeline for the stream of knowledge in all branches of study.

Furthermore, English is spoken as a first language by more than 350 million people worldwide, and as a second language by more than 430 million. To learn the nuances of the English language, you can enroll in the Spoken English Course Online to understand in-depth theoretical concepts in English.

From this blog, you can learn what phonology, Phonetics, and their segmental features are. Furthermore, you can also understand the comprehensive summary of vowels, consonants, and other phonetic features of the speech.

Phonology is the study of sounds in a language and the categorical organization of speech sounds in language. You can learn how speech is organized in the mind and used to convey meaning for communication. Phonology can be related to many linguistic disciplines that include Psycholinguistics, Sociolinguistics, Language acquisition, and cognitive Science.

Phonetics is the branch of linguistics and it is the study of the human speech of articulation. It is mainly concerned with speech or sign and their physiological production, acoustic properties, auditory perception, and neurophysiological. Furthermore, it is the study of abstract, grammatical status, and sound system or sign.

Now we shall see the IPA(International Phonetic Alphabet) chart for a better understanding of Manner of Articulation and also helps you to understand 45 sounds in English. 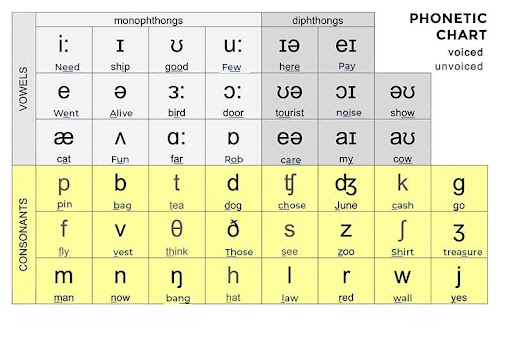 To learn these sounds in a practical environment you can join Spoken English Classes in Chennai at FITA Academy for a better understanding of IPA charts.

Articulation Mode is how the flow of air is blocked as it flows out of the lungs and out of the nose and mouth. Consonant sounds depend on places of articulation used in English. They are Bilabial, Labio-Dental, Dental, Alveolar, Post-Alveolar, Palatal, Velar, Glottal. Based on these, there is a six Manner of Articulation.

When you entirely restrict the flow of air via your mouth by allowing air to pass through your nose, you get nasal consonants. There are three nasal consonants in English. They are as follows:

Stop consonants or Plosive: Stop consonants are created when the vocal tract is closed completely and airflow is released in a burst to add meaning to the words. Fricative: A fricative is a partial blockage, so that air flows through the narrow channel without any blockage. Affricate: The result of Affricate consonants is the mix of stop and Fricative consonants. The affricate sounds are: These two sounds are produced when air is blocked with the tongue beyond the alveolar ridge (post-alveolar). Approximant: Air turbulence is caused by approximants, which are two articulators that meet near together.   Lateral: In Lateral consonants, the sound is produced when your tongue blocks the middle of your mouth. VOWELS:

So, the difference between i: and æ is the position of the mouth. when you pronounce these words you can notice the vowel i: is a close vowel and æ is an open vowel.

Cardinal vowels: Cardinal vowels are a set of vowels arranged in a front-back and close-open, etc. So you can understand better from the diagram below. 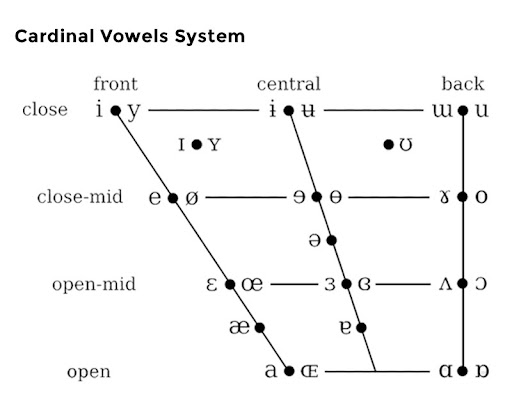 Short Vowel: Short vowels give short sounds while pronouncing a word, for example, the words like Pot, cat, top, etc. Now, we shall see short vowel symbols and for verification, you can refer to the above diagram. Long vowels: Long words give long sounds while pronouncing the words like sheep, leaf and beat, etc. Now, we shall see the symbols of long vowels. IPAWord example Diphthongs:

Diphthongs are sounds that consist of a movement from one vowel to another, which can be described as long vowels. You need to remember that, the first part of the diphthongs is much longer than the second part. For example, when we pronounce the diphthong vowel /aɪ/ sound in the word “eye” only I is noticeable and the loudness of the sound is decreased. So as the result the “I” part is shorter and stronger.

There are eight Diphthongs in English /aɪ/ , /eɪ/ , /əʊ/ ,/aʊ/ ,/eə/ ,/ɪə/ ,/ɔɪ/, /ʊə/. You can remember the diphthongs’ sounds in an easier way by dividing them into three groups. Now, we shall see how all diphthongs sounds differ from each other through an example: IPAWord example

From this, you would have understood what is Phonetics and phonology, and the sound systems in the English language. To learn more and to build your career opportunity you can enroll in the Spoken English Classes in Bangalore providing theoretical and practical knowledge of the English Language to the learners under the expert trainers.