Trusted By 20,000+ Students
Stay Ahead With FITA

C is a general-purpose programming language developed by Dennis Ritchie. Like most of the procedural language, C has the specialized feature for structured programming, allows variable scope and recursion. One good thing about C programming is, it enables mapping of constructs to machine instruction thereby requiring very minimal run-time support, and so it is widely used in application development.Learn programming at FITA, our trainers are very well knowledgeable. Enrol yourself into C C++ Training in Chennai.

C is one of the main programming languages being used for more than 2 decades and C compilers are also available for most of the computer architecture and Operating Systems. C programming is still popular for its simplicity of expression, compactness of the code, wide range of applicability and limitless flexibility it has to offers. Learn C Training in Chennai at FITA.

At FITA, we provide an excellent and high quality C & C++ Training in Chennai. We have a team of highly skilled professionals to equip you and build a strong foundation for C and C++. The curriculum can be customized as per individual’s requirement.

In the year 2017, the ISO introduced C++ with modernization and it is also known as C++17. The natural advancement demand for the version change and the version such as C++11 and C++14 are the previous advancements of C++. C++ is the best programming language which aids for the maintainability in case of complex projects. Join the C C++ Training in Chennai which enlightens the candidate with the basic knowledge to learn the other advanced technologies.

Games are developed using C++ as it has better control over the hardware. Cocos2d-x is the free and cross-platform engine for the game development which is written with the C++ language. C++ is used for mobile development, game development, and cloud architecture and also for some parts of web development. C++ is suitable for the cloud environment to build an OS with a cloud or distributed environment. C Training in Chennai is the best training for beginners.

C++ is used for the server side and not predominantly for the client-side programming. Amazon, Google and Facebook use C++ for optimizing the performance of their website. For utilizing the speed systems Amazon uses the C++ language. The PHP code in Facebook is converted into C++ language for compiling into the byte code. This process of using two languages is to maximize the performance of the web page. C C++ Training in Chennai is conducted with a personalized and market-oriented course to place the students immediately in the top companies.

Bindings are structured, the declarations are in the decomposition mode, for if or switch the init statement is used, variables with inline are identified and used, expressions with fold are introduced, for the class templates the template argument is reduced, for the non-type template the parameter is declared as auto, and constexpr.if are some of the new features added to the C++ language. C++ Courses in Chennai trains huge students to bridge the gap in the job industry.

The code for the tuples is cleaner and easier. Tuples are supported as a special language and it returns the different values from a function. Decomposition declaration is the other name for the structured bindings. The structured bindings support if the initializer is an array or supports functions, provides functions, contains public members or if it is non-static.

The if or switch statement with the C++17 has a new scope. The condition is not leaked outside as it is visible to if and else statements. The different names are used in case of it and separate scope for ‘it’ condition. The additional scope is mentioned with a single one line. C Training in Chennai offers intensive knowledge in the programming language.

The member variables are declared and initialized in one place and it is possible with the help of the non-static data member. A header file is used to specify the variables in the new version. Previously the methods and functions are only specified and now the variables are also specified. The variables can be with different translation units, can be referred identically, should be defined with every translation unit in which it is used, the behavior is exactly like one variable. C++ Training is the best training to procure high-level jobs in the IT industry.

The attribute constexpr if is used for the condition of static if in the C++ language. This condition is used to handle certain tricks which are already done using the C++ programming language. The std::enable_if is replaced with the new constexpr if. For the Metaprogramming and template code, this condition is helpful in writing cleaner code. Learn coding with affirmative value via C++ course fees in Chennai. We provide quality training to all our students.

Fold expressions are used in case of recursive functions like sum of variables or all. The rules have to specify in the language. No need to write different functions for the input parameter. The fold expressions help for the readable code, cleaner code and shorter code for the functions and variables. C Language Training opens the door to multiple vacancies as it is upgraded and modernized now.

As like the functions the standard class templates are handled and deduction rules for the templates are applicable to the new one. A partial deduction is not possible and the parameters are mentioned fully or otherwise not mentioned.

The auto is used everywhere in the C++ to return variables or return types. For the non-type template, generic lambdas are used and it is used to deduce the variable to return values. A separate parameter is not there for the non-type and this is used for this condition.

Join the C++ Programming Course at FITA to have a blissful future with the opportunities in multiple industries.

Basic knowledge is important to build the advanced level knowledge in any industry. Join the C C++ Training in Chennai at FITA to upgrade your coding skills. The trainers have huge numbers of years of experience which is propelled in the classes taken by the trainers. So, join the course to get a job in a highly competitive world and grow progressively with technology.

Class, object, inheritance, encapsulation, message passing, data abstraction, polymorphism, and dynamic binding are some of the qualities of the C++ programming language.

List the differences in the languages Java and C++?

Java has threads whereas C++ does not provide threads. The automatic collection for the garbage is not there in the C++ and it uses destructors to invoke the elements. Pointers, unions, templates, structures and operator overloading are not there in case of java. Go to is not there in Java. Java is independent and C++ is not independent. The source code in java is converted into the JVM byte code for the understanding of the machine and finally, it displays the output in the runtime.

Explain the meaning of Class?

The attributes and actions of the class are defined as a class. The design which defines the user data is called class.

Define the object in C++?

The example or the model of the class is called an object.

Describe the role of the access-specifier?

The member of the class protected is included in the inherited class. Inside the class both the protected member and private member are accessible whereas outside both are not accessible.

The data and functions in a class act together over the entity are called encapsulation.

Explain the term abstraction when learning the C++ language?

Abstraction is the process of exhibiting important information and hiding the internal processor implementation.

Why should I join the FITA institute?

How equipped are the trainers at FITA?

Trainers at FITA are industry experts who have 12+ years of experience in their field. They train students with real-time projects and case studies.

Does FITA support us with placement?

How do I Enroll at FITA for training?

Contact our support number 98404 11333 and enroll for training. You can also directly walk into our branch and enroll yourself. 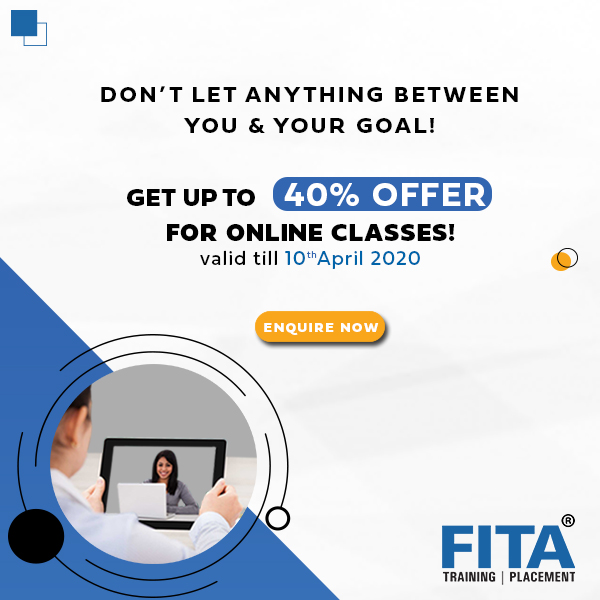