The WordPress Training in Chennai at FITA aids you in mastering the key concepts of the WordPress tool such as setup, configuration, installation, establishing domain, hosting account, creation of content, and management of content efficiently under the training of professional WordPress Developers. By the end of the WordPress Training Program, you will acquire all the skills to work proficiently with different WordPress Plugins & able to deploy website multimedia and security features for a Website like a Pro. 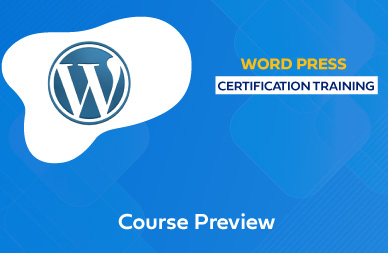 Course Highlights and Why WordPress Training in Chennai at FITA?

About WordPress Certification Training in Chennai at FITA

WordPress Course Certification is the professional accreditation that demonstrates that the participant has obtained in-depth knowledge of the WordPress tool and its application. With a real-time WordPress project experience provided by the end of the WordPress course, this certification specifies clearly that the candidate has incorporated the necessary job skills to work as a WordPress Developer. Submitting this accomplishment certificate along with your resume during the interview sessions helps in prioritizing your profile and supports in opening the gateway to access for wider career horizons.

Furthermore, these developers are primarily held responsible for content publication and optimization on the digital platform and ensure that the displayed content caters to the current business goals.

Also, it is the responsibility of the WordPress Developers to make sure that the Websites are functioning and running according to the specification of the Business goals. Based on the survey reports submitted by the Bureau Labor of Statistics it is stated that by the end of 2028, the number of Web Development jobs is expected to rise by 13% which is faster than the average. The areas where WordPress Software is being used predominantly are eCommerce WebSites, CMS WebSites, Job Board, Blog, Small Business Websites, Forum, Wiki, Review Website, Educational websites, Wiki, Rating Sites, Voting Sites, Subscription Websites, and Membership sites.

I completed my WordPress course in Chennai @ FITA. The Syllabus of WordPress was up to the industry standards. Also, the Training Faculty of the WordPress Course was so proficient that it made the learning pace easier. I had a lot of trouble in understanding the Security Features of WordPress but my trainer taught me the concepts until I understood it. A sincere thanks to her. It is because of her now I have a clear idea of WordPress. Nice Work FITA!

The WordPress Training Program @ FITA was informative and useful. In-depth training of the WordPress Tool was provided at FITA. Right from the Installation till the hosting of the Account everything was taught practically here. It helped me to understand even faster. Thank you FITA Academy for providing the best WordPress Training.

The overall learning experience at FITA's WordPress Training was too good. The complete syllabus of the WordPress Course was covered within the given period. Also, the FITA Training Institute constantly notified me of job openings. My Trainer Prepared me for the Interview and helped in building my resume. Thanks, FITA! I recommend the FITA Institute to all my friends.

I did my WordPress Training in Chennai at FITA at my friend's suggestion! WordPress Training is a complete package that covers everything that a WordPress Developer should know. FITA Academy is really a perfect platform to learn about the WordPress Tool. Well-Equipped Trainers with rigorous practical training of the WordPress Content Management tool was provided at FITA! Highly Recommended for Freshers

Why Should I Learn the WordPress Course in Chennai AT FITA?

Does the FITA Training Institute support me with Placements after the WordPress Training in Chennai at FITA?

How can I enroll for the WordPress Training in Chennai at FITA?

How old is FITA Training Institute, and how many students have been trained by FITA till now?

What will be the batch size of the WordPress Course in Chennai at FITA, and will I be given enough practical Training for the WordPress Certification Course?

Are the WordPress Trainers at FITA Training Institute Well-Equipped at FITA?

What are the various payment options accepted at FITA Training Institute?

FITA provides the Best WordPress Training in Chennai. WordPress is an open-source platform that was created using PHP. WordPress is one of the most popular CMS available in the market and millions of websites run on the WordPress platform. The world’s most successful bloggers run their sites using WordPress. There is a huge demand for PHP developers who are familiar with WordPress. Anyone who is not good at programming, but interested in Web development can learn WordPress and develop their own websites.

FITA is the institute which is involved in the training and has gained good experience in bringing out the real talents in the students. So, here at FITA apart from the syllabus, we provide the best professional training of the WordPress tool. FITA helps the students to know their skills through counseling and training. Join FITA for the best WordPress Training in Chennai and imbibe your special skills through the counseling with the coordinators.

Word press is the Content Management System that works with the background of PHP. The course revolves around the different concepts of word press with real-time exposure. The students are trained to write their own blogs with the help of word press and the different plug-ins are explained with real-time applications. So, the whole training is like project work for the students. FITA is the best WordPress Training Institutes in Chennai and gains comprehensive knowledge after the training at FITA.

What will you learn in the WordPress Training in Chennai?

FITA offers the best placement support to the students. The placement coordinator is aware of the market trends and they advise the students to do regular practice in the areas in which they are lacking.

The location of the institute is very near to the reach of the students. If the students have concerns with the location then we have five branches in Chennai to choose from. We understand the personal problems of the students and we provide the comfort needed in the time and place.

Who are the course learners?

It helps to know about the reports for the performance of the website. It provides information about the website traffic and the reason for the increased traffic. FITA provides the Best WordPress Training in Chennai and Join the best center to promote the skills required for the job market.