Looking for the best platform to learn about Xamarin? Enroll at FITA! Xamarin Training in Chennai at FITA provides the best-in-class training on how to build robust native mobile apps for iOS, Android, and Windows platforms using Xamarin under the mentorship of Real-time professionals with certification. 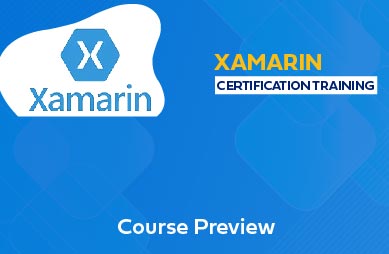 Course Highlights and Why Xamarin Course in Chennai at FITA?

Skilfully curated Xamarin Course modules to meet with the global industry requirements.
Courseware that is curated by Industry Experts to have practical exposure to how to build the native mobile apps for the Android and iOS platforms using the Xamarin cross-platform.
Expert and highly qualified Xamarin Trainers with more than a decade of experience in the Mobile App Development Platform.
Extensive Xamarin Training to make you equipped with the XAML, controls, and data binding, Xamarin Forms, Xamarin Studios, and Xamarin Cross-Platform App Development.
Immersive Instructor-led Xamarin Training session in Chennai at FITA
Professional Xamarin Training at an affordable cost with certification upon successful completion of the course.
A regular Recap of the previous Xamarin classes is provided to strengthen your memory.
Smart Classrooms with Applied method of Xamarin Training in Chennai at FITA.
Flexible batch timings - Weekend, Weekday & Fast track Xamarin Training in Chennai at FITA.
FITA provides 100% Placement assistance to the eligible students after the successful completion of the Xamarin training.
We have tie-ups with more than 600+ companies ranging from small to large scale companies.
FITA Academy has an Active Placement Cell that helps the students to land in their dream careers.
Read More Read less

Getting to know Xamarin

Setting up and Configuration of Xamarin

About Xamarin Certification Training in Chennai at FITA

Xamarin Course Certification is the authentic credentials which illustrate that the candidate has gained in-depth knowledge of the Xamarin platform and its application. With a real-time project experience provided at the end of the Xamarin course, this certification states that the candidate has acquired the necessary skills to work as a Xamarin Developer. Having this certificate along with your resume helps in prioritizing your profile at the time of the interview, and also it opens the door for a wide range of career opportunities.

Bygones are the days where Mobile Applications was a mere choice for most of the enterprises. Today, Mobile Applications has turned out to be the basic necessity for any business even if it is petty. Apart from building Mobile Applications the challenge over here is to build the apps that can be used on all platforms such as Android, iOS, and Windows. It is also proven in a recent survey that 80% of the enterprises are keen on developing applications that can enable, function, and support multiple platforms. The major reason to build increased cross-platform apps is that they are more cost-effective and easy to use and it can attract a large number of users which eventually results in greater benefits.

Based on a recent survey collected from the Mobile App Development field it is stated that there are more than 2.7 billion mobile apps downloaded yearly. Now, you can realize the scope for mobile app developers in the current days. Also, it is predicted that this particular field of the IT industry has scope for tremendous growth. So, learning Xamarin would pave the way for a brighter future. Some of the reputed companies that hire Xamarin Developers are Google, Facebook, Amazon, Uber, Netflix, Cisco, Microsoft, and Oracle.

I enrolled for Xamarin Course at FITA. I must tell that this was one of the best learning paths I have come across. Experienced Trainers with updated coursewares made the entire training session a perfect one. Blended learning of the Xamarin concepts was provided. Right from the installation, configuration, setup, architecture, iDE, and app development in iOS and Android using Xamarin everything was thought about extensively. Thanks to my Xamarin Trainer. Great work FITA!

Xamarin Training in Chennai at FITA was overall good. A holistic training on how to build the native apps for iOS and Android platforms using Xamarin was provided. Also, my trainer was so patient enough to clear my doubts. Good platform to learn about the Xamarin Course. Highly recommended for freshers who seek to learn about the Xamarin platform.

My overall experience at FITA's Xamarin course was pretty well and good. I liked their training approach. The best faculty with regular assignment sessions made my entire learning session an interesting one. Special mention about the Support Team, they were too helpful in assigning the classes to my flexibility. Good work FITA!

Xamarin Course @ FITA was really good. They follow the best training approach. Skilfully compiled Xamarin Course modules with hands-on training were provided at FITA. Before FITA I had zero knowledge about Xamarin or about its application but now I have a clear and better understanding of the Xamarin technology. A heartfelt thanks to my trainer. Any freshers can surely opt for this platform. They are truly reliable.

Why Should I Learn the Xamarin Course in Chennai AT FITA?

Does FITA support me with Placements after the Xamarin Training in Chennai?

How to Enroll in the Xamarin Course at FITA in Chennai?

How old is FITA institute and how many students have been trained by FITA till now?

What will be the batch size of the Xamarin Course in Chennai at FITA and will I be given enough practical Training for the Xamarin Certification Course?

Are Xamarin Trainers well-equipped at FITA in Chennai?

Trainers are Industry Experts who have a decade of experience as Xamarin Developers. Also, the Training faculty of FITA are Working professionals from the Mobile Apple Development field and they provide hands-on training to the students.

What are the payments mode accepted at FITA?

If you are an app enthusiast wanting to code top-of-the-line native apps across all three platforms Android, iOS, and Windows, it is a good idea to learn Xamarin. FITA is perhaps the best choice for learning Xamarin Training in Chennai, which offers the most experienced and best trainers for the cross-platform development tool.

As a mobile developer, you would want to run your app on all available platforms and mobiles. However, the thought of learning a new language, APIs, and other stuff every time may just want you to stick to one single platform. This is where Xamarin can help you out.

For any app, the native design is always the preferred solution. Xamarin tools aid developers to write native iOS, Android, and Windows apps, along with native UIs (user interfaces) and then share this code across multiple platforms. In addition to native UI, app logic is uniquely shared across multiple platforms that it makes Xamarin a must use. Xamarin also binds the same UI controls and APIs that are used to build Mac, Android, and iOS apps in platform-specific languages. A few lines of code are enough to access numerous libraries of the different platforms, paid and free components, and third-party services.

At the end of the Xamarin training course, participants will be able to do the following:

Eligibility and Prerequisites to learn the Xamarin Course

Prerequisites: There are no prerequisites to learn the Xamarin Course in Chennai at FITA. However, having the basic knowledge of the following will be of added advantage for you to learn the course quickly.

Though there are a number of cross-platform mobile development apps such as PhoneGap, React Native, etc., the primary reason why Xamarin scores over other cross-platform development software is that code can be reused to one hundred percent across the different platforms. Moreover, other major advantages being able to use Xamarin Test Cloud to fix the bugs, support for both MVVM and MVC patterns, there is no need to develop additional plug-ins thus saving time and resources, and Xamarin meets the need to build large and complex projects.

Why Xamarin Course at FITA?