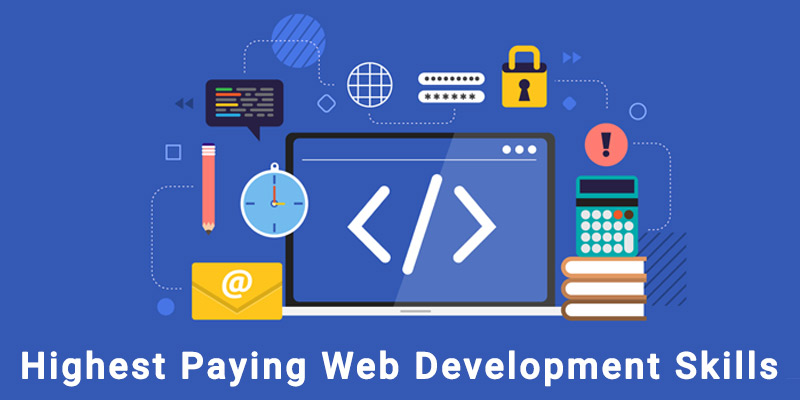 Foremost Programming Language among Highest-Paid Web Development Skills Java is the most widely used coding language, among the highest-paid web development skills. It is an open-source and platform-independent programming language. Java is used in most popular websites like Youtube.com, Google.com, Facebook.com, Twitter.com, LinkedIn.com, Amazon.com, and ebay.com. For the Android Operating System, Java is the basic language and most commonly used for developing Android apps. About 500 companies are using Java for a back end system and building applications.  Learn Java Training in Chennai and after learning you can get the salary of INR Rs 5,00,000 per year.

To produce interactive web pages and to display the content dynamically for the users,  websites like Twitter, YouTube, Face book, and Gmail use JavaScript. The advantages of JavaScript are its simplicity, interoperability, swiftness, rich interface, versatility, and extended functionalities. Learn JavaScript Training in Chennai and get an average salary of INR Rs5,50,000 per year

Basic Language among the highest-paid web development skills. Developed as a hypertext preprocessor, PHP performs as full support for different databases and its effective combination of the internet protocol. PHP is currently in its 7th version. With PHP, You can maintain and promote up tailored app development. There is no need to write the added code. You can automate normal growing activities and reduce overall costs. Learn PHP Training in Chennai will help you gain one of the highest-paid Web development skills. The average salary of a PHP developer in INR Rs3,00,000.

Python is one of the web development skills that pay you high. Most common Web services like YouTube and other Google projects rely on Python. The video game industry is completely based on this programming language. Also, Python is used in several scientific projects and project management. Learn Python Training in Chennai and get the salary of INR Rs5,00,000 per year.

C/C++ is like bread and butter of programming languages. The low-level systems are written in C/C++ such as file systems, operating systems. C C++ is also widely used by competing programmers because of its rapidness and stability. It is prominent among development languages. Learn C C++ Training in Chennai and fetch a salary of INR Rs 4,50,000 per year. Besides, gaining skills from all these above programming languages, one should  also need to know about stack communication skills and  stack overflow, etc Improving core skills like C, C++, Python, WordPress, development, UX design, Testing, soft skills SQL, Objective and having years of experience will help you earn a good salary which is nominally high compared to other developers.