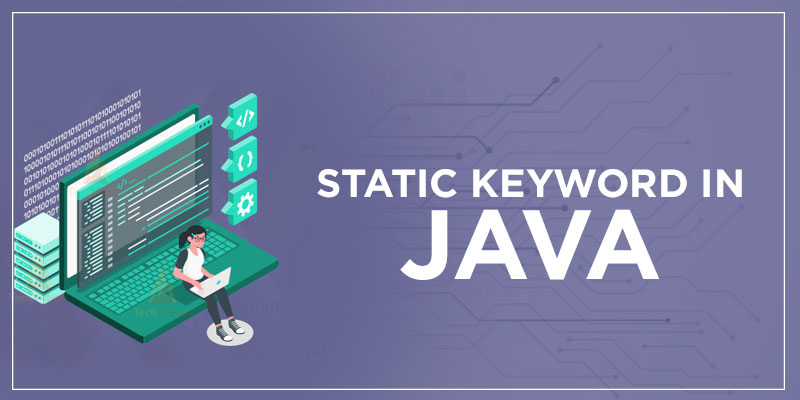 Keywords in Programming Languages are the reserved words that you cannot use as a variable name or identifier because they have been already defined in the language either as a parameter or a statement.

In java, there are 57 keywords or reserved names and ‘Static’ is one amongst them. Let us talk more about this static keyword with this table of content.

What is statically used for?
Static block
Static method
Static variable
Static Classes
Let us understand the static keyword and its implementation starting with…

What is static used for In Java?

Static keyword can be used within blocks of code, methods, variables, and classes by preceding the member name with ‘static’.Now let’s move on to learn how to use this keyword with each member, starting with

Now that you have understood why we use static keywords, let us see its use cases, beginning with Static Block.

the number of objects. A static block can be accessed with an object.

Static variables can be used to define a common property for all the objects, like a common college name for the students, or the common company name of several employees.

Hope you understood static variables in java with the above program, so next up we have static methods in java.

Check out this Complete Java Online Training by FITA. FITA provides a complete Java course including core java and advanced java J2EE, and SOA training, where you will be building real time applications using Servlets, Hibernate Framework, and Spring with Aspect-Oriented Programming (AOP) architecture, Struts through JDBC bundled with, placement support, and certification at an affordable price with an active placement cell, to make you an industry required certified java developer.

Declaring methods static, would not require you to create an object and then call the method, and instead, you can refer to them using class methods because static methods are of class rather than the objects of the class.

Here is an example to demonstrate the static method in java. Output for the above program

You might have observed that the main method is declared static so that  JVM does not require to create an object to invoke the main method, which also makes it memory efficient.

There is a restriction that the static methods cannot use or invoke non-static data members or methods directly nor can you use the this and super keyword in a static context. Let me show you an example of this.

Hope you understood why we use static methods and when, next up we have static classes in java.

The commented line to print str would cause an error saying, “non-static variable name cannot be referenced from a static context” if executed.

This was all about a static block, static method, static variables, and static classes in java, their implementations and use cases along with example programs. To get in-depth knowledge of core Java and advanced java, J2EE  SOA training along with its various applications and real-time projects using Servlets, Spring with Aspect-Oriented Programming (AOP) architecture, Hibernate Framework, and Struts through JDBC you can enroll in Certified Java Training in Chennai or Certified Java Training in Bangalore by FITA or a virtual class for this course, at an affordable price, bundled with real-time projects, certification, support, and career guidance assistance and an active placement cell, to make you an industry required certified java developer.