What are Python Arrays and how to use them? 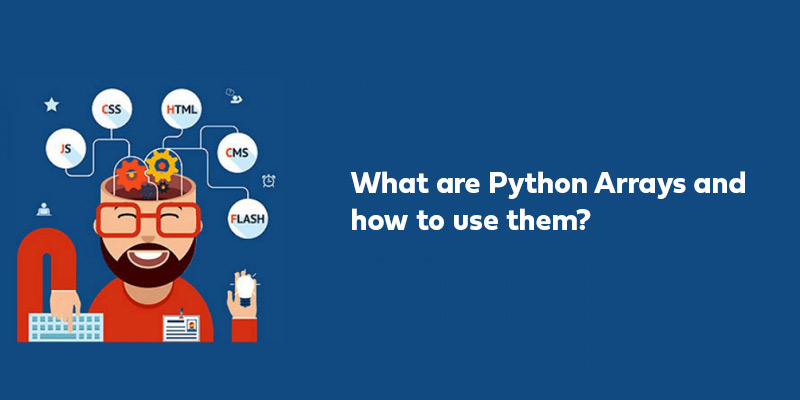 In this blog we will learn

Suppose you had to store names of all the members of your group,how would you do it using python?

Most often programmers make use of lists in programs while programming in python, and use arrays in other famous programming languages such as Java, C, C++ etc. Well the common differences between a list and an array are

So the arrays in python are a collection of elements of the same data type in an ordered sequence, on which the operations like insertion, deletion, traversing and updating can be performed. It is one of the data structures.

Creating An Array In Python

Arrays unlike lists need to be imported in the program from the array module, and you can do it as so.

You can also import every function from array so that you wont need to use the array.array() whenever you are using arrays in your program, like this

Since, we just need an array so we have imported the array from the array module. You can also use an alias word for array using as keyword.

The array(data type,elements) takes two positional arguments, data type such as integer,float,char,double,signed long,unsigned long etc., and the second one as the values to be stored.

Here, d is a data type for float.

Note that all the elements passed in the argument are of the same data type and cannot be of different data type.

Here is another example,

Here, i is the data type for integers. You can find all the notations for different keywords in the figure a

Further, the other elements can be found with the index, and the last element with an index -1, the last second with -2 index.

To get one element at a time, we can use for or while loops to iterate over the array and print the elements.

Also, you can use the slicing method to get specific elements from the array,

The array_name[start:end:step] will return the elements in the array_name from the start index until the end index, by removing or skipping step number of elements in between.

Length of an array

which is equal to the size or numbers elements in the array, irrespective of the index of the last element.

Check out this Python Online Course by FITA. FITA provides a complete Python course where you will be building real-time projects like Bitly and Twitter bundled with Django, placement support and certification at an affordable price.

Elements can be added at a specific index using .insert() method.The insert() method takes two positional arguments , first as the index and second as the value to be inserted.The index of all the elements will be updated after an insert method.

The index of any element can be found using the iterable.index(value) method.

The index method will return -1 if the index is not found for the passed parameter.

When you need to add multiple items or an array of items ( of same data type as of array) to your array, use the extend() method like this

This can be done with concatenation as well, using + operator between the two

Removing elements from the array

The last element from the array can be removed using the pop() method.

Now we will remove a specific element from the array using remove() method.

This was all about converting lists to string and strings to lists. To get in-depth knowledge of Python along with its various applications and real-time projects, you can enroll in Python Course in Chennai or Python Training Institute in Bangalore by FITA at an affordable price, which includes real-time projects with certification, support and career guidance assistance.