How Java Is Different From Other Programming Languages 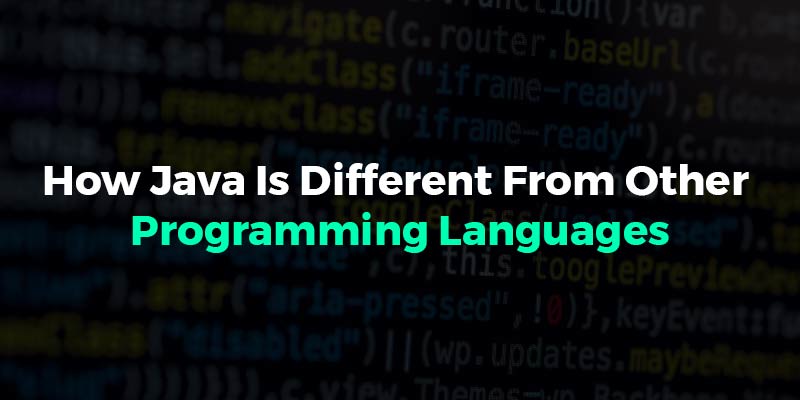 If you want to start your career in software development, Java is one of the best choices. Based on the report, it is stated that there are more than 123 million TV organizations and around 2.9 million Mobile app applications that are developed using Java coding language. According to the survey, it is reported that the growth of Java in software Development is expected to increase more than 20% in the future. In Oracle, it is stated that there are more than 8,000,000, Wikipedia is stated more than one million. But overall, it is expected to be around 9,006,325 Java developers.

To acquire industrial-based skills of Java and its coding process, join the Java Online Course at FITA Academy. The student who cannot attain the classroom training can learn Java from the comfort of their home.

To acquire in-depth knowledge of the Java programming language, you can enroll in Java Training in Chennai at FITA Academy provides essential professional skills under the guidance of Experts.

Java is a high-level, fastest, flexible, and object-oriented code programming language. It is a portable language among many software developers. When Java is compared to C or another programming language, Java has unique features because the Java compiler converts code to Bytecode, which is then parsed by software known as the Java Runtime Environment (JRE) or JVM. We gain the benefit of “Write Once, Run Anywhere” with this (WORA). Particularly, Java help to run a program from computer to online applications, scientific computing systems to media players, mobile phones to the Web.

Reasons Why Java Is So Popular

Here we listed the purposes why Java is the most popular remains with its large ecosystem.

Now, we shall discuss important features that Java has when it is compared to other programming languages.

Java is the platform-independent language that includes; “Ruby, Lisp, Scheme, Scala, Clojure, Python, Perl, PHP, C# and many other coding languages. Among these languages, Java is the most popular language for coding.

Java can run on multiple platforms, and it is also distinct from other programming languages like C and Python, C++, etc. Java can operate on any platform, but it should be software or hardware.

Java code may run on various platforms, including Windows, Linux, Sun Solaris, Mac OS, and others. The processor compiles Java code and turns it to bytecode. Because it can operate on different systems, this bytecode is platform-independent, i.e., Write Once, Run Anywhere (WORA).

If Java weren’t capable of building stable and secure applications, it wouldn’t be applied to its extent. On the other hand, Java provides a security manager that allows the programmer to establish access rules, lowering the risk. Another major reason for Java’s success is its high level of dependability and security.

Java programming language is simple to learn because it is easy to understand the syntax. Learn who has the reacquisition of C++, then it is easy to understand the Java syntax because both have similarities in coding the program. Automated Garbage Collection helps to eliminate unwanted data. Additionally, Many difficult and rarely-used features, such as implicit reference and opcode, have been eliminated from Java.

Java is Object-oriented which means built software incorporates diverse types of objects that combine both data and performance. OOPs, programming concepts help to analyze software development and support by implementing some sets of rules.

Java can move the Java bytecode to any program because it doesn’t expect any execution for processing.

Java is more agile than other programming languages because Java bytecode is near to native machine code. As Java is a defined language, it is more deliberate than codified languages, e.g., C, C++, etc.

It allows modules to be loaded flexibly, and it implies that modules are stored only when needed. It also has compatibility for algorithms written in its native languages, C and C++.

Java helps the users to perform assigned applications in Java; with the help of RMI and EJB, we can build classified applications. Java’s traits help us locate files by inviting the systems from any computer on the internet.

The most significant variance between Java and other programming languages is the way Java code is implemented. Furthermore, Java bytecode can be operated only on the system in which it is compiled.

Now, we shall discuss, how Java is distinct From Other Programming Languages:

The most significant variance between Java and other programming languages is the way Java code is implemented. Furthermore, Java bytecode can be operated only on the system in which it is compiled.

Enroll in Java Course in Chennai at FITA Academy, which imparts necessary skills in Java concepts with real-time experts with certification guidance.

These are the few benefits of Java compared to other programming languages.

By this, you would have understood the importance of the Java programming language and how it is widely utilized for many organizations. Though it has created many positivities among many programmers, Java coding is not easy to understand compared to other programming languages. But Java has access to wide opportunities, so to better understand Java coding, you can take up a Java course to enhance your career opportunities.

To acquire in-depth knowledge of Java coding and its frameworks, you can Join Java Training in Bangalore at FITA Academy. It provides comprehensive learning of basic concepts like XML, Threads, and Java Array and hands-on practice on the Java framework

Recent Post: Why Python Named The Top Programming Language For This Year