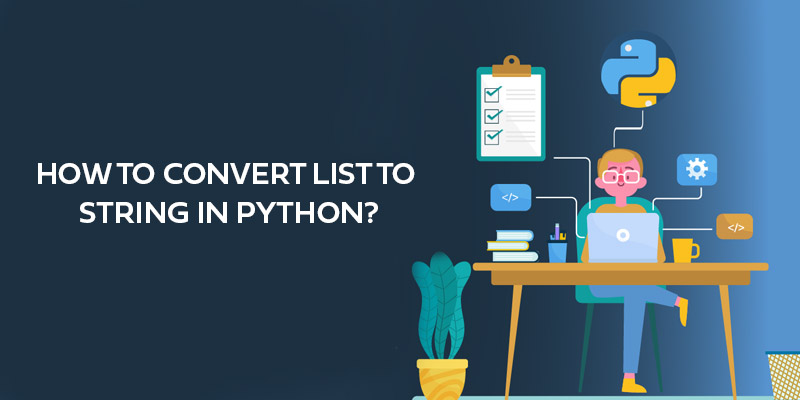 You might have used lists in almost all of your programs, and suddenly required to change it to a string, maybe to print the result in a single line, or something else. So in this blog, I will share with you the various methods with which you can convert a list to a string in the following sequence.

Here we will use for and while loops to iterate over the list and convert it to a string.

All the above programs will have the same output as follows:

You can join the lists with any character in between using the ‘character’.join(iterator) method.Here is an example

Or like this if you don’t have to store the string.

Also you can directly pass the list to the join method as a parameter.

You can either pass a comma or something else within the quotations of the join method.Now for an integer in the list we might have to change the above program so that all the elements are of string data type.

Alternatively, you can just print the list as a string with str() method and remove out the [] with strip() method

Or by removing first and the last element

Checkout this Python Online Course by FITA. FITA provides a complete Python course where you will be building real-time projects like Bitly and Twitter bundled with Django, placement support and certification at an affordable price.

The map method takes 2 positional arguments, a method and an iterable.a method could be an int() or str() and an iterable could be a list, tuple string, set etc.It will then map or change the elements of the iterable to with the method provided.

Here is an example for converting lists containing different data types to a string using map() and join() methods.

But to change the string as we had earlier we can use the split() method.

This was all about converting lists to string and strings to lists..To get in-depth knowledge of Python along with its various applications and real-time projects, you can enroll in Python Training in Chennai or Python Training in Bangalore by FITA Academy at an affordable price, which includes real time projects with certification, support and career guidance assistance.