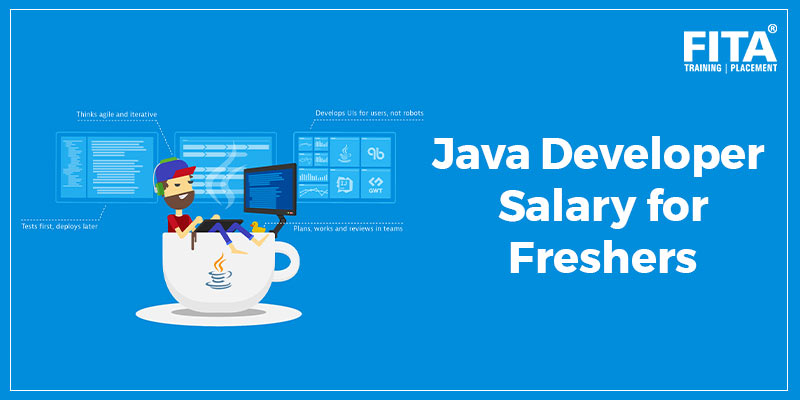 If you are looking to become a Java developer, it is important to understand what your salary potential may be. In this blog, we’ll take a look at the average Java developer salary for freshers.

Java is a programming language and a computing platform to empower the large share of the modern digital world through its services and applications. According to statistics-times, Java remains the most popular language used worldwide and a leading competitor to all other programming languages. If you are interested in learning and have expertise in Java, enroll for Java Training in Chennai at FITA Academy. Usually, IT aspirants and graduates at their initial stage, spend their maximum time practicing and learning the Java language. It helps them to prepare for job interviews and later allows them to create applications as per the client’s needs. The importance of Javascript can be understood from the fact that MNCs like LinkedIn, Twitter, eBay, and Amazon use Java to create an interacting interface between web applications and backend systems.

Java developers prefer this language for three important factors or special features. The features are

As discussed earlier, the demand for Java and Java developers is increasing day-to-day, so it always sustains the job opportunity balance for freshers who are looking for a good java developer salary for freshers. Let’s discuss the introduction to Java developer, their demand, and salary structure.

A Java Developer is the one who is responsible for writing powerful codes for the development of applications (either android or software). In addition, a Java developer is also responsible for the integration of front-end and back-end systems. The tools such as Microsoft Products, Adobe PDF Readers, and Mobile Android applications are all written in Java scripts. Even the API tools from Google are also made of Java language, therefore the demand for Java developers never ends as well as the java salary for freshers never goes down.

Though Java developed 20 years, the language still remains a popular programming language among all IT aspirants. Furthermore, Java holds the third rank among the comprehensive list of popular technologies in the world. The demand for freshers with a Java developer background is high as the language has its own independent platform. So, it enables programmers to transit easily from one computer to the other, and all other languages don’t afford the same versatility as Java. Henceforth, most popular and leading IT firms across the world prefer Java as their prime programming language. Therefore, the demand for Java and Java developers will grow exponentially in global IT markets in the future.

Increase your demand for job opportunities through learning Java Training in Bangalore at FITA Academy.

The initial Java Developer Salary in India for Freshers is excellent. It is attracting freshers from all the computer science fields to learn Java and get placed into an IT Firm. Everyday applications in computers, laptops, and Android phones are the results and outcomes of Java. That is why the demand for Java and Java developers is continuously increasing, and they are paid extremely well in any IT sector.

The Salary of a Java Developer in India for freshers varies for different professionals depending on the company, experience, location where the applicant is working, the seniority roles, and the skill set. Developers salary at various IT firms are shown below the chart

Key Reasons Behind the High-Demand for Java Developers

Become a supreme Java Developer through pursuing Java Online Course and completing it with excellent faculties and experts at FITA Academy.

Roles and Responsibilities of a Java Developers

Fresh candidates and entrants looking for a good Java Developer Salary in India for Freshers are required to accomplish or complete the following key responsibilities as a Java developer, which are

To become a competent Java Developers, let discuss some tips to expertise and unlock your Java skills. Meanwhile, take a look at JAVA Course in Chennai at FITA Academy.

Freshers who are passionate to become a competent Java developer must practise the following tips:

Once any aspirant decides to begin their journey with Java, they must practice and have a clear understanding about Java, Javascripts, loops, arrays and operators. Then, the applicant must also possess knowledge on APIs like Java.math and Java.io.

Practice all the codes and scripts repeatedly until the right algorithm generates. Frequent practice may help candidates to write syntaxes without errors.

After successful learning and expertising in Core Java, the applicant must go for Java EE. This is an advanced java program which has wider applications in website development. Some of the expertised core skills in Java EE are WebSocket, Java Server Faces, and Servlet.

The applicants seeking a good salary of java developer in india for freshers are advised to apply their acquired knowledge on Java to multiple projects. So that, the applicant can refine their skill set for expertised Java Developer.

After core expertise in Java and Java EE, the next phase is to learn Java Frameworks which is nothing but the Hibernate and Spring Frameworks. Here, the frameworks are the codes that are written in advance and can be added to the customized solutions. Freshers who have spring and hibernate skill background are likely to get hired.

Learn Java through enrolling for Java Course in Bangalore at FITA Academy. The leading institute in Chennai and Bangalore for successful placement.

Java and other programming languages have transformed the intelligence and the ease of access services to multiple software and applications in the IT Industry. People across the world are interconnected through Javascripts and their coded applications. Therefore, the increasing demand and more comprehensive applications have numerous job benefits and global opportunities for freshers looking for very good java developer salary for freshers. Hence, IT aspirants are encouraged to apply for Java developer roles at their desired companies. Nevertheless, the salary hike for Java developers usually depends on proficiency, work experience, and the ability to heighten the company.