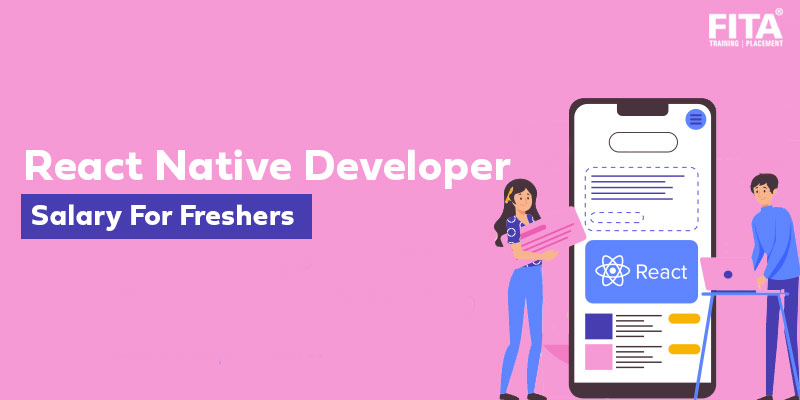 React Native is a cross-platform mobile application development framework that allows developers to build applications using JavaScript. It was developed by Facebook and released as open source on GitHub. React Native uses the same concepts of HTML, CSS, and JavaScript but it runs on top of the native platform APIs. This means that your app will run faster than if you were building an app with other frameworks such as Xamarin or Ionic Framework. The main advantage of this technology is that it can be used both in native mobile applications and hybrid apps.

React Native has become one of the most popular technologies for developing cross-platform mobile apps because of its ability to create high quality native looking apps. As a result, there are many job opportunities available for those who want to work as a React Native developer. According to Indeed, the approximated average pay for a React Native developer is 1.8 LPA However, some companies offer higher salaries for experienced developers.

The best part about working as a React Native developer is that you get to learn new skills and use different programming languages. You also get to work from anywhere since you don’t need any special equipment to code. FITA Academy provide you with React Native Training in Chennai and to also help you learn in a quick and effective way. Another benefit is that you can easily find jobs as a React Native developer since there are so many companies that are willing to hire people with this skill set.

Who is a React Native Developer?

React Native developers are the ones who create apps for Android and iOS using React. They use JavaScript, HTML, CSS to build native mobile applications. The job profile of a react developer includes building web-based UI components that can be used in an app. This means that you will have to learn how to code in both frontend (HTML/CSS) and backend (JavaScript). If you already know how to code then you might consider becoming a React Native developer.

What does a React Native Developer do?

A React Native developer works on creating user interfaces for mobile devices. They need to understand what kind of features should be included in an app before he starts coding. Once the design is ready, the developer creates the UI using JavaScript. Then, he or she converts the UI into native code using tools like Expo. Finally, the developer tests his or her app on various platforms. Learning through instructor led JavaScript Training In Chennai to acquire the know-how and expertise on how you can effectively use JavaScript.

As far as specific salaries go, it seems that React Native developers in India are earning somewhere in the range of Rs. 4 lakhs to Rs. 8 lakhs per annum. This is a wide range, and salaries will vary depending on factors such as experience, skillset, and location.

However, we can take a look at some general trends based on Different Companies, work experience and skills to get an idea of what React Native developers in India are earning.

Salary Range Based On Different Companies

The approximated salary range for React Native Developer based on different companies is provided by ambitionbox so that you can get an idea of where you should start your career. 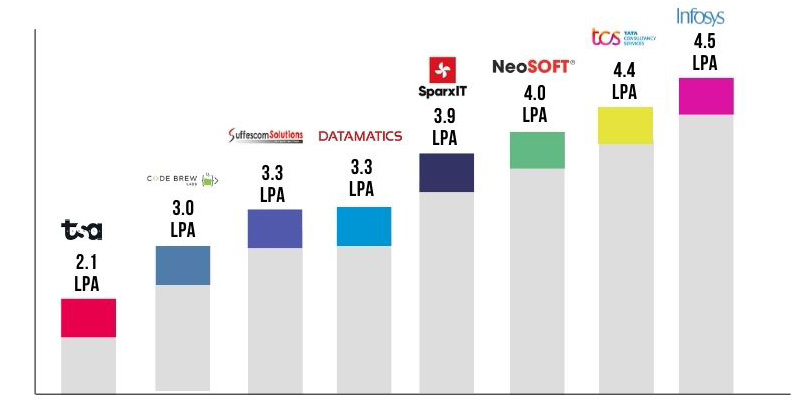 Salary Range Based On Work Experience 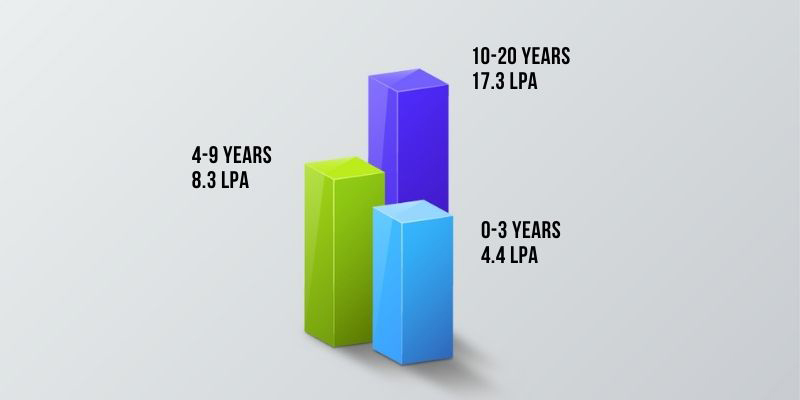 To develop your React skill you can enroll in our React Native Online Course and then move on to where you’ll learn all the fundamentals of React Native development.

Salary range based on skills

React Native is an incredible technology for building user interfaces. React Native developers have a lot of skills that make them valuable in the market. React Native salaries can vary based on a developer’s skills and experience. As it becomes more popular, salaries will continue to rise. 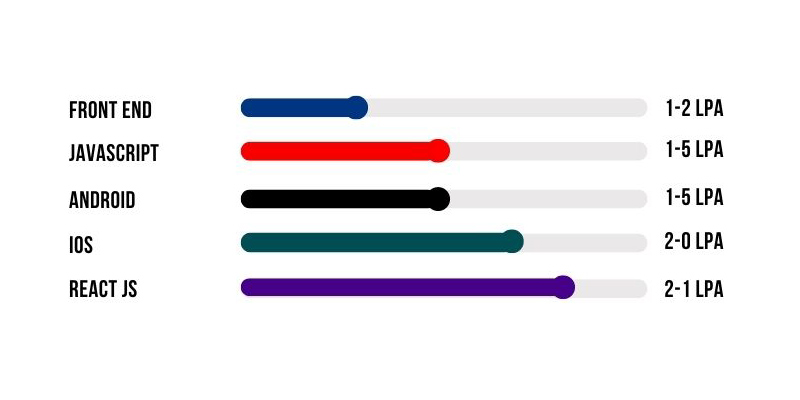 The React Native developer needs to possess extensive technical skills and deep domain expertise in both React and native technologies. This enables them to build cross-platform apps easily and quickly. They must have a strong background in building native iOS and Android applications. Also, they needs to know how to work efficiently with different frameworks including Xamarin, PhoneGap, Cordova, Ionic, and others.

A react native developer works on the frontend part. They creates custom components and integrates it into the existing codebase of the application. These components are used to display information about the app. This includes login screens, splash screens, progress bars, etc.

The developer needs to know how to use APIs and integrate them within the application. For example, they might write code to retrieve data from a server and display it on screen. In addition, the developer must understand the architecture of the application and how to make changes to the backend.

Hiring React Native Developer not only saves your time but also results in better performance, speed, and user experience. You don’t have to learn anything else to develop apps. Just hire a React Native Developer and let him take care of everything. He’ll handle every aspect of development process including design, coding, testing, deployment etc.

The following are some of the key features of React Native:

The world is moving rapidly towards developing apps for mobiles and tablets. Mobile app development is becoming increasingly important day by day, especially for startups and small businesses. As per statistics, there are about 2 billion smartphones around the globe and this number keeps increasing every day. As the demand increases, the competition among mobile app development companies also increases. So, how do you stand out of the crowd? Here are some tips that might help you answer these questions.

What is State and how does it work?

State is used to control the component. State also allows the value to store in it. State is mutable, hence it changes whenever you want. You can use state to store the information about the current screen. For example, let us say that we have a login form where we enter our username and password. We can save the entered credentials in the state and then display that information in the next screen. This way, we don’t have to pass those parameters again and again.

How Different is React-native from ReactJS?

React Native uses JavaScript for rendering views. It is based on the concept of components. Components are reusable building blocks which help developers build user interfaces easily. The main difference between React JS and react native is that React Native has its own API’s. These APIs allow developers to interact with the device. And they can access hardware features like camera or GPS etc.

Virtual DOM: In virtual DOM, only the changed parts of the view are updated. This helps in reducing the number of re-renders. Also, it provides better performance than the real DOM.

What is Redux in React Native?

Redux is a predictable state container. In addition to supporting web browsers, mobile devices, desktop computers, and serverless functions, it enables you to write applications that run across multiple environments.

This means the entire data flow in your application is handled inside a single container while persisting previous state. A Redux store contains three main parts:

How to debug React Native Applications?

The first one is the Developer Menu. You can access it by pressing command+R on macOS or ctrl+M on Windows/Linux. Once you’re inside the Developer Menu, you’ll see a list of options. One of those options is called “Developer”. It is possible to debug your application remotely if you select that option.

For example, let’s say you want to find out why the component isn’t rendering correctly. To do that, you’d go into the Developer mode, and then select “React”. After that, you’d type in “componentDidMount()”, and hit enter. Then, you’d wait for the function to run. If it doesn’t work, you could try changing something in the code, save it, and then rerun the function again. If it still doesn’t work, you might want to check what’s happening during runtime.

You can do that by selecting “Console”. When you do that, you’ll see a window pop up showing the console logs. Here, you can write down whatever errors you see and then fix them.

Another way to debug React Native is to enable live reload. Now, whenever you change a file, the app will reload itself without having to restart.

This feature is especially useful because it lets you know instantly whether your changes worked or not.

If everything goes well, then you can continue working on your project. But if things don’t work, you can always disable auto-refresh by unchecking the box.

What is Props Drilling?

Props drilling is an advanced technique where you pass props from parent components to child components. The idea behind this is to avoid passing unnecessary properties to children.

How to create a custom scroll view in React Native?

A ScrollView is a special kind of View which allows us to scroll through its content. We can add any number of Views inside a ScrollView.

What is the difference between Stateless Functional Components and Class Based Components?

Stateless functional components are functions that return JSX elements. They have no state, and they cannot interact with the outside world.

Class-based components are classes that extend Component class. These components can have state and they can call methods on their parents.

What is the difference Between React Hooks and Redux?

Hooks are a new addition to React 16.8.0. Hooks allow developers to reuse existing logic across different parts of the application.

Redux is a library that helps us manage our data. It has two main concepts: Actions and Reducers. An action is an object containing information about what happened in the UI. A reducer receives actions as input and returns a new version of the state.

What is the difference between PropTypes and TypeScript?

What is the difference between ES6 modules and CommonJS Modules?

Do you know if Python can be used with React Native-Explain in detail?

Yes, it can! You simply need to have your python code exported as.js file which is then imported into the react native app using require() method. If you are fresher, this Python Tutorial for Beginners can help you understand all the details of writing Python code in react native app.

The above React Native questions and answers will help you answer common reactive level interview questions and improve your chances of success during a job interview. Remember to be confident, articulate, and answer the questions honestly. You can also use the information in this article to prepare for other interviews, such as technical interviews and get the best react native developer salary in India.