Threads and Multi threading In Java 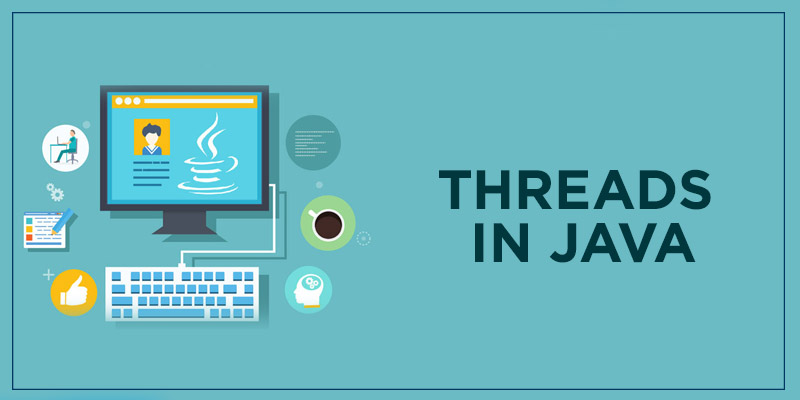 In this blog, we will dive deeper into understanding the Threads in Java, with these steps…

Let us now  dive deep in to each of these topics one by one starting with..

What are Threads in Java?

When you are using your mobile, you might be watching a video or checking messages until the song downloads, or in a common sense you would be using multiple applications at the same time. This is known as multithreading, where each of the applications is running under a thread.

In java, a thread is a lightweight process or smallest independent unit of program which is created and controlled by the java.lang.Thread class.

If you understand well what is a thread in java, let’s move on to our next topic, Java Thread Life Cycle.

Whenever we create a thread, it will have a lifecycle which means it can lie only in one of the shown states at any point of time.Those states are

States Of A Thread

A new thread begins in this state and remains here until the program starts, therefore it is also known as a born thread.

Once a new thread starts, the tread comes under a runnable state where the program is ready to be run or is already running

In the waiting state, a thread is either temporarily inactive or has been blocked and the thread cannot move forward until it is again moved to the runnable state.For instance , when the program is waiting for an input or output to complete, it is under waiting thread.Moreover when a thread is in a blocked or waiting state, there might be any other thread running as scheduled by the thread scheduler.

The threads in waiting or blocked state do not consume any CPU cycle.

A thread enters a terminated state, when the running thread has completed its tasks, or if there is any unusual event like exceptions, segment fault or errors.

These were the states of a java thread, let us now move on to understanding the Main Thread Of Java.

Assigning all the tasks to the main method or main thread can make our program slow because of a long running process and can even show the “The program is not responding, do you want to wait or kill the program” dialog box.

This was about the main thread of Java.So let us understand how to create a separate thread in java using the Thread class and the Runnable Interface.

Creating A Thread In Java

Java has a built in support for creating threads, unlike many other programming languages.

A thread in java can be created in two ways:

Check out this Complete Java Training Online by FITA. FITA provides a complete Java course including core java and advanced java J2EE, and SOA training, where you will be building real time applications using Servlets, Hibernate Framework, and Spring with Aspect Oriented Programming (AOP) architecture, Struts through JDBC bundled with, placement support, and certification at an affordable price with an active placement cell, to make you an industry required certified java developer.

Let us now understand how to create a thread using each of these methods with example programs in java.

Hope you understood creating a single with the Thread class, and now let us see how to create a thread with a runnable interface.

Create a custom class and implement a runnable interface on it using the implements keyword.
Override the run() method, by providing the code to be executed at that time.
Create an object for the thread class.
Invoke the start() method of the Thread class to run or call the custom run() method.

Let us understand what is multi threading in Java and how to implement it.

So far we have been creating a single thread, and using the 2 threads in a program (main and custom thread). However a program can have more than 2 or multiple threads running each after the other or with a wait in between multiple threads.

There are many methods which helps managing the threads, few of them are:

getName: returns the name of the thread

getPriority(): returns the priority of the thread

SYNTAX for the getPriority method

isAlive: returns true or false based on the result of the thread is running or alive

SYNTAX for the isAlive method

SYNTAX for the join method

SYNTAX for calling the run method

sleep: it gives a wait or a pause to the execution of the code for the specified amount of time.

SYNTAX for the sleep method

start: It starts the execution of the thread, and calls the run method

Let me show you an example for creating and running multiple threads in an application.

This was all about threads, creating a thread with Runnable Interface and Thread class and multithreading in java along with example programs for implementation.

To get in depth knowledge of core Java and advanced java, J2EE along with its various applications and real-time projects using Servlets, Spring with Aspect Oriented Programming (AOP) architecture, Hibernate Framework,and Struts through JDBC you can enroll in Java Training in Chennai or Java Training in Bangalore by FITA or a virtual class for these courses at an affordable price, bundled with real time projects, certification, support, and career guidance assistance with an active placement cell, to make you an industry required certified java developer.

Recent Post: Comparable and Comparator Interfaces In Java: Differences and their use case