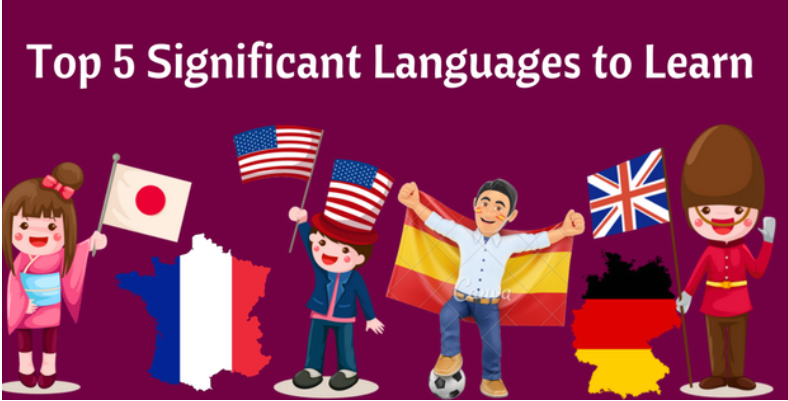 In today’s scenario, it is difficult to find a youngster who does not speak or study at least a single language apart from their native language. Globalization makes more people cooperate and communicate more with a variety of businesses.

From professional networking and academic collaboration to traveling and transport, the modernized world needs us to converse in different languages. But there are over 7000 languages globally and it is quite difficult to choose the most significant languages.

Here is the list of Top 5 Significant Languages to Learn

There are over 375 million people are the native speakers. English is considered to be the most influential language in the world. Hence this makes English as the most important language among all other languages.

It is essentially the mother tongue of the computer technology and internet. Also, it is significant to add which it is the official language in Canada, Great Britain, and the U.S., that are all hits the top list of the world’s largest economies.

French is considered to be the initial language of the diplomatic disclosure for centuries. 79 million people primarily converse in French, but the whole number of speakers rises up to 370 million, that really proves the importance of this language.

You must know the fact that French ranks still in the 6th position in the biggest economy in the world. Paris stays as a genuine cultural epicenter. In addition to this, French is extensively considered to be the language of love, which refers, it needs to be one of the most popular languages.

Germany is playing the role as the most dominant economy in Europe for decades. The German language is said to be the most widely spoken in the European continent. In addition to 105 million native speakers, 80 million people around the world also use German as their second language.

This language is rather authoritative and serious which absolutely mirrors the determination of the country to maintain the position of the global powers and remain on the most important languages list.

The Spanish language is also considered to be the most widely used languages. There are over 330 million native speakers when more than 420 million use it as their second language.

Spanish is said to the primary language over 20 countries, most of them are located in Latin America. Although it is essential in the United States as well since about 35 million people use Spanish in this country at home.

Japanese is said to be another Asian language which hits the list on top among most of the significant languages due to Japan’s influence and economic strength. There are about 127 million are Japanese native speakers and around 1 million use Japanese to some extent.

However it is quite difficult to comprehend its symbols at first, Japanese is usually a wonderful language and not much demanding than many other European counterparts. It is not very famous outside of Japan, but there are chances that you will end up learning it if you are dealing with IT and other modern industries.

Hope the article Top 5 Significant Languages to Learn will help you to have a glance at different foreign languages:-

Recent Post: How to Improve your Rankings in the Google Search Engine