How Puppet vs Ansible Differs in DevOps 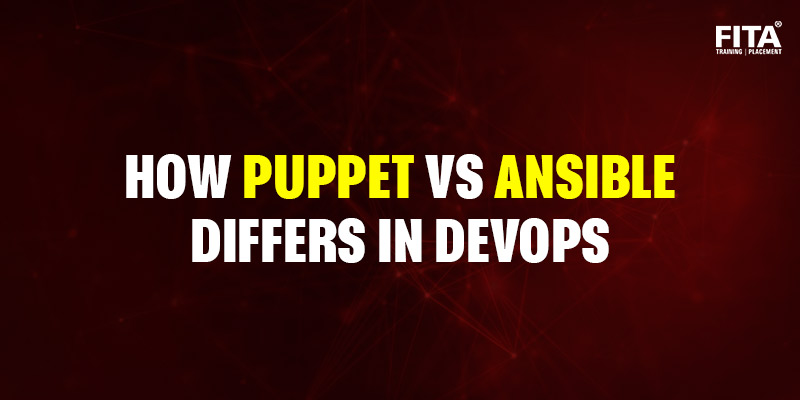 Ever came across the debate on Puppet Vs Ansible? Both the DevOps Puppet and Ansible are used in the development and operation teams of software development. DevOps is significant in the faster development of new products and the maintenance of existing ones. Thus, DevOps tools play a vital role in IT companies. Knowing the features, installation, language, disadvantages and advantages of Puppets and Ansible might help in better performance at a workplace. Scroll down to find whether they complement each other or compete with each other!

DevOps is a cultural philosophy, a set of practices, a collection of technologies that automate and combine the processes that are performed by IT and software development teams. It strongly emphasises team empowerment, communication & collaboration between teams, and the automation of technology.

Under a DevOps model, the development and operations teams are no longer divided into separate groups. The ultimate aim is to improve the speed and quality of software deployment by working together throughout a product’s lifecycle. It’s a new way of working and a change in culture that will have big effects on teams and the companies they work for.

Join DevOps Training in Chennai and get trained with the budding culture philosophy in the IT field. This certification might help you to open up the doors of numerous job opportunities worldwide.

The deployment of the applications is effectively guided by four principles of the DevOps methodology. The principles listed below are the best aspects of making software today.

By following these rules, organisations can improve the quality of their code, get their products to market faster, and plan their applications better. Thus DevOps contributes to improved collaboration, security, scalability, Rapid delivery, Reliability and high velocity of innovation. Check out the DevOps Tutorial to learn more about DevOps for self-learning.

DevOps teams use tools to speed up and automate processes, which helps to make them more reliable. A DevOps toolchain helps teams deal with important DevOps basics like continuous integration, continuous delivery, automation, and collaboration. Few of the popular DevOps tools are,

Enroll yourself with DevOps Training in Coimbatore at FITA Academy to get a brief knowledge and experience in the above-mentioned DevOps tools. Now let’s take an in-depth look at the most popular Ansible vs Puppet DevOps tools, their features, merits and demerits.

The puppet open source tool for managing and deploying configurations. It has been used since 2005. Luke Kanies created the CM (Configuration Management) tool, which was made by Puppet, an Oregon company that makes software. Most multinational companies are now decentralised and have to deal with serious problems. This is where Puppet makes its entry to benefit the companies.

It is an advanced automation solution that small IT teams can use to get things done. The tool uses Ruby scripts and can make it easier to set up servers on-demand in a short amount of time. This Configuration Management (CM) tool automates how servers are set up. It can run on Linux, Windows, Unix, and Mac OS, among other operating systems, and can handle more complex tasks and infrastructures. Join the Puppet Online Training to acquire an expansive knowledge of using the tool at your workplace. Learning how to use a tool might help you in saving your time and focus on other important daily tasks.

Ansible is an IT automation tool used for application deployment, configuration management, intra-service orchestration, cloud provisioning, and other IT needs. Today’s IT environment has become too complicated. System administrators and developers need better ways to get things done quickly. In that case, it’s a big relief for IT experts to have an open-source automation tool that makes complicated tasks easier.

Ansible has become one of the best automation tools over time, and many companies, such as Udemy, LaunchDarkly, and Tokopedia, use it right now. The tool for automating tasks is free and simple to set up. It can also help you fix some of the very complicated IT workflows. The automation tool came out in 2012, and it works best for IT experts, DevOps engineers, and any other professional who needs a Configuration Management tool to get things done well and quick. Join Ansible Online Traning to gain a comprehensive knowledge to work with DevOps. Since DevOps is being widely used in the IT industry recently, it is inevitable to grow your knowledge in DevOps tools.

Ease of Setup and Use

The puppet was made so that only system administrators could use it to do complicated tasks, but Ansible was made for the use of everyone. So, it’s much easier to install and set up Ansible. Both tools have different ways to set them up. For example, to manage all the nodes in Puppet, you must first install the Puppet server and then the Puppet agent. Installation usually takes between 10 and 30 minutes, depending on what the company needs and how it is set up. Also, its own declarative language is used.

Ansible doesn’t need an agent because everything is managed and done over the SSH protocol. Also, it is written in Python, which is a language used in most Unix and Linux installations. So, the process of setting up is much easier and faster.

Even though this was a setback, the puppet is better than Ansible in other ways. For instance, the puppet can find and fix syntax errors faster, even before you run the task. While in Ansible, it’s hard to find the error and see if the task will fail until it’s done. Also, the YAML syntax that Ansible uses is not a language that is easy to debug.

For instant deployment, the Puppet client must write configurations in its own declarative language and pull them from the server. Ansible Server, on the other hand, uses YAML syntax to push configurations to all of the nodes.

The scheduling of Ansible vs Puppet is that the puppet agent checks all the nodes every 30 minutes, while Ansible, which is a free tool, needs Ansible Tower, which is an enterprise version, to do the same thing. In general, compared to Puppet, the free version of Ansible doesn’t have as many advanced features.

Both tools will always have their backup systems ready in case a task doesn’t go as planned. If the active node fails, the secondary node takes over. And the puppets have more than one master to hide the fact that they have failed.

In comparing Puppet vs Ansible both are very scalable, which means they could easily handle a huge number of new nodes. But Ansible is easier to use when it comes to scalability.

Both tools have their own repository or library. The Puppet tool has Puppet Forge, and the other tool has Ansible Galaxy. Puppet Forge has about 6,000 modules that Puppet supports and approves. So, there’s no need to spend time with the ones who haven’t been given tasks. Ansible Galaxy doesn’t have this feature, so it has to be done manually, which takes time and work.

Puppet is more developed and has a better graphical user interface (GUI) than Ansible. It’s a great way to manage, keep track of, and look at tasks. One can also use a command-line interface, or CLI, to keep an eye on tasks that are very complicated. Ansible’s UI feature can only be used by people who have paid for the enterprise version.

Ansible came out in 2012, while Puppet has been on the market since 2005. So, more and more people are learning about Puppet and supporting it by using it for a number of years. Also, they have a bigger group of people with whom they can talk and get answers. There are two support portals for the Puppet community:

On the other hand, Ansible has professional support for the enterprise version, holds annual meetings for users and contributors, and has mailing lists for each topic. In conclusion, there are fewer online support communities and troubleshooting tools for Ansible than there are for Puppet.

When we look at real-world situations, like configuration drift, we can see how different Puppet and Ansible are. This is the phenomenon that says a set-up will get farther from its original purpose. By default, Puppet has the ability to fix problems caused by configuration drift. Measures can also be set up in Ansible, but the system administrator has to do it himself. This will take time and money, which goes against Ansible’s quick start-up.

One of the major advantages of Puppets is that they can tell the difference between various changes to a configuration. It can sometimes be a corrective change to keep the intended configuration and stop configuration drift, among other things. Sometimes it’s about changes that were made on purpose, like when the system administrator changes the configuration on purpose. This is not a difference that Ansible makes in its features offered.

Get enrolled in the DevOps Training in Bangalore to upskill yourself with the knowledge of various popular DevOps tools. The certification can help you in upgrading your profile with hikes and promotions.

A table is given below for an easy understanding of the differences between Ansible vs Puppet.


The DevOps Interview Questions and Answers might help you withlearning more about the unique features of the tools and the DevOps in a whole. Make a solid preparation with consistency and get placed in a high-paying DevOps job role.

Ansible Vs Puppet – Complementary or Competing?

Puppet is a Configuration Management (CM) tool and Ansible is an automation tool. They can never be compared to competitors except for the fact that a few of their features and functions get overlapped. A few companies use Puppet for configuration management and Ansible for the software lifecycle release process. One of the tasks in their playbooks is literally calling the puppet module to get all the systems to have the same configuration. This is a good example of a hybrid approach.

The Ansible part of this is used to automate and coordinate between different systems. Here’s a basic outline of the process of the hybrid approach. Start by taking a group of hosts off the load balancer, making sure database connections have stopped, and doing upgrades or migrations. They run puppet to make sure configuration and state consistency are the same, and then put things back online in whatever order they think is best. All of this is done with a single command. Gain more comparative knowledge of tools from the DevOps Online Course. Expanding your knowledge in DevOps tools has become a basic knowledge that a recruiter would look for.

Both tools are growing closer to each other in recent times. Puppet vs Ansible  both use a task-based method, and Ansible Tower is meant to be an alternative to Puppet Enterprise. Both tools deserve to be around. It has been proven companies often use Ansible to quickly roll out Puppet. Thus, they co-exist in the field of IT software development.