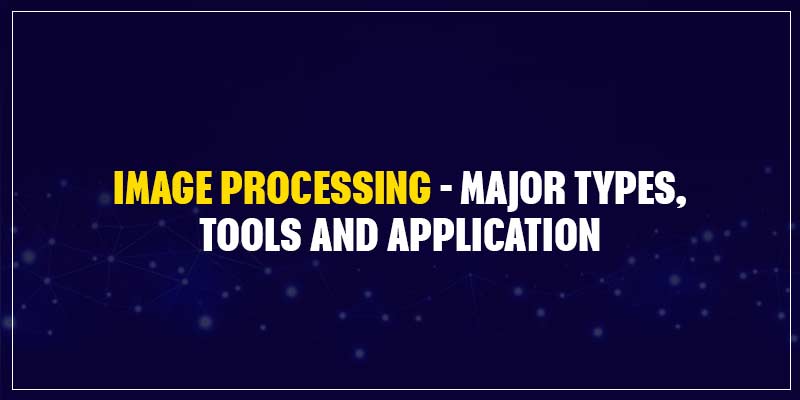 Necessity is the mother of all inventions. The human necessities have grown to an extent that we now have self-driving cars; Virtual Reality in entertainment, education, and health care; digital assistants like Alexa, Siri, and Google; Quantum Computing; Artificial Intelligence Human Augmentation and Augmented Reality. Besides this tremendous growth, the human necessity keeps growing and so is the field of technology. Digital Image Processing is yet another product of human necessity in this digital world. Almost in every field, it has become vital and it keeps evolving every now and then with new technology.

People prefer images to read. This is because the human mind can capture things much faster from an image than from a piece of written work. In the pre-historic period, people used paintings to convey their messages over scripting them in words. Mural arts are the best example that our society possesses from the stone age till now.

Any image is a two-dimensional function. The signal function of the image is f(x,y). In simpler words, an image is represented by its height and width. Its dimensions are measured in the form of pixels ranging from 0 to 255. Pixel is the smallest unit of an image that constitutes the shade, opacity, and colour of the image. The pixel of an image is always mentioned in any one of the three forms – Grayscale, RGB, and RGBA. The image processing function initially takes place at the smallest unit of the image, a pixel. The output of the entire function can be created at any desired pixel level. 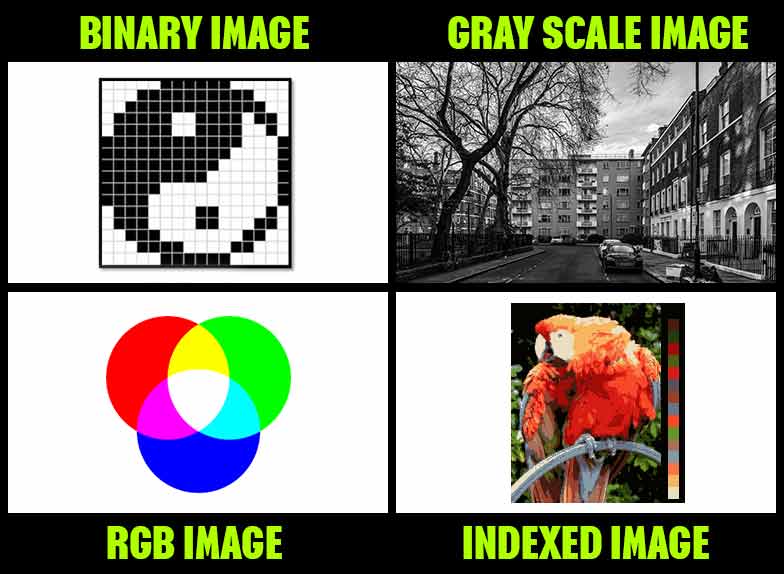 Based on the pixels in an image, it can be classified into four major types with different compositions of colour. They are,

Image Processing is the core part of Computer Vision. It plays a crucial role in robotics, self-driving cars, and object detection. It is a set of computational techniques for enhancing, reconstructing, analyzing, and compressing images. There are two methods of image processing,

For an Analog, the input and output are always an image. In Digital Image Processing the input is an image and the output can either be an image or a description or a code that is analyzed from the input image. Python is the widely used programming language in the Image Processing function. Learning Python Training in Bangalore might make the function easier for you to work.

The Image Processing function takes place in different phases with the original image.

In image processing, this is the initial digital phase. Digital image detection is used in creating specific images, such as real-life situations or the internal arrangement of an object. This term is widely used to describe picture processing, storage, congestion, display, and printing.

Image restoration is the process of measuring an underused, new image against an immoral/noisy image. Action blurring, sound, and camera focus are all examples of exploitation that might take place in the process. The picture restoration technique aims to minimize noise and recover decision loss.

It necessitates knowledge of both light physics and colour vision phycology. Human colour is used to classify products, building materials, food, locations, and time of day. Color is utilized in the image processing process for separation.

Wavelets are similar to the different types of paint brush used for minor detailings with respect to the topographies in a painting. It is one of the effective tools for representing the image. These wavelets allow the extraction of multiple solutions of the same image.

It also enhances the quality of an image, primarily by removing any potential corruption for a better version. This method is based on probabilistic and mathematical models, and it can be used to remove blur, camera misfocus, noise, watermarks, missing pixels, and other errors that can impede neural network training.

It explains the elements of shapes and structures in an image. Morphological processing techniques help in creating datasets for training AI models. In specific, morphological analysis and processing can be used at the annotation step, when you define what your AI model should detect or recognize.

It is the process of displaying and describing data that has been processed. AI systems are built to be as productive as feasible. An AI system’s raw output appears to be an array of numbers and values that represent the data that the AI model was trained to produce. A deep neural network, on the other hand, normally does not include any output data representations for the benefit of system performance.

The main purpose of Image Processing falls under five different categories. They are,

It is one of the widely simple-to-use libraries in Image Processing. The multi-platform tool helps in editing photographs and videos with the programming languages C++ and Python. Take up the C++ Training in Chennai to make use of the tool and get benefited. Open Source Computer Vision (OpenCV) library helps in building a common infrastructure of Computer Vision and accelerates the use of machines in commercial goods.

Tensorflow is the well-known Machine Learning and Deep Learning library in recent times. Due to the simplicity of API, it become popular and outperformed other libraries. Data Streams and Differential Programming are major sources of this open-source library. It is used in machine learning applications like neural networks. Machine Learning supports the production of new products by learning consumer behaviors with respect to the trends. Join Machine Learning Course in Bangalore at FITA Academy to gain an expansive knowledge in the Image Processing and Artificial Intelligence field of technology.

Matlab permits quick prototyping leading to its usage in research. This tool is used in making the application of Image Processing. The code of Matlab is very concise in comparison with C++ and this results in easy utility and troubleshooting.

Python Image Library (PIL) supports a wide range of image formats including JPEG, PNG, GIF, BMP, TIFF, and PPM. It allows you to perform rotating, resizing, grayscaling, cropping, etc. in the original image. The tool is available for Mac OS X, Microsoft Windows, and Linux. Using this tool might be easier when you have knowledge of Python. Join Python Training in Chennai to strengthen your fundamentals in this programming language.

Keras is a collective library of Image Processing that includes data from different libraries like Tensorflow, CNTK, and Theano. Since Sickit-learn and PyTorch come under Tensorflow it also gets placed in the Keras library. It decreases the cognitive load by offering strong, basic APIs and limits the number of user actions.

The human brain can analyze, interpret and assimilate a meaning to an image easier than a written document. So, the application of image processing is important from engineering to marketing, law enforcement to military force.

Computer/Machine Vision is one of the interesting applications of Digital Image Processing. Computer Vision sees, identifies things, and processes the whole environment by delivering insights from its observation. This is used in self-driving cars, drones, and other technologies where detection of images is necessary for automation. 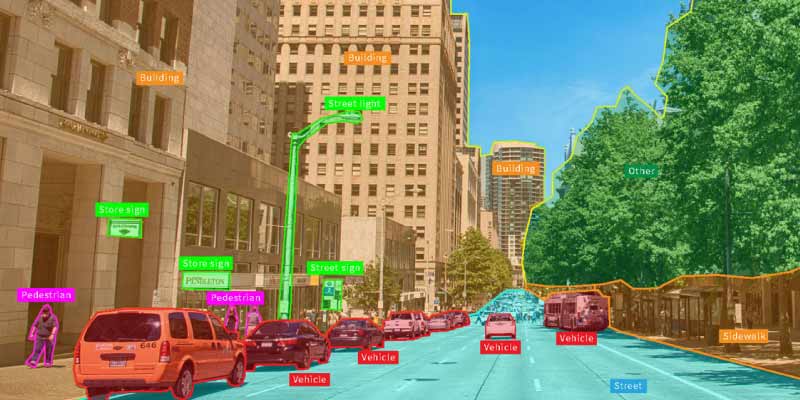 Almost all the social media channels and editing apps provide filters for images. Additionally, the default camera of mobile phones also provides filters for taking pictures these days. These filters are the widely used application of Image Processing. Filters are the set of functions used to add more colours and other aspects to the existing original picture to make it more appealing. 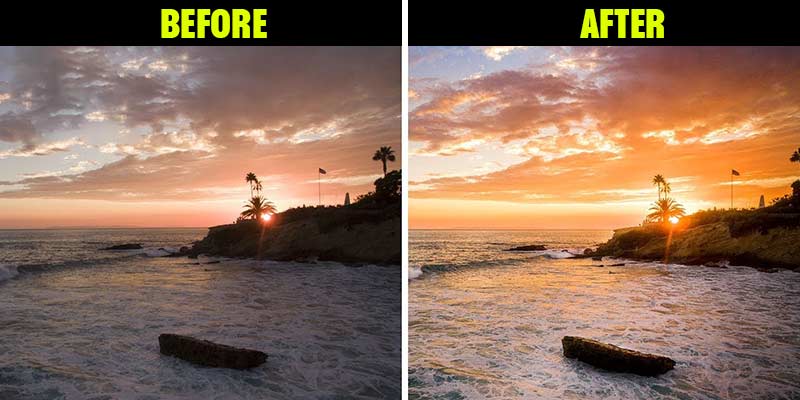 Join Graphic Design Courses in Chennai to make use of this application to its fullest. The course can help in creating pictures that can leave impressions in the mind of any individual who encounters it.

Image Processing in the field of medicine has played a vital role in the well-being of humankind. It has drastically increased the diagnostic process. It has paved the way for X-ray Imaging, PET Scans, UV Imaging, Medical CT, Cancer Cell Image Processing, and much more. 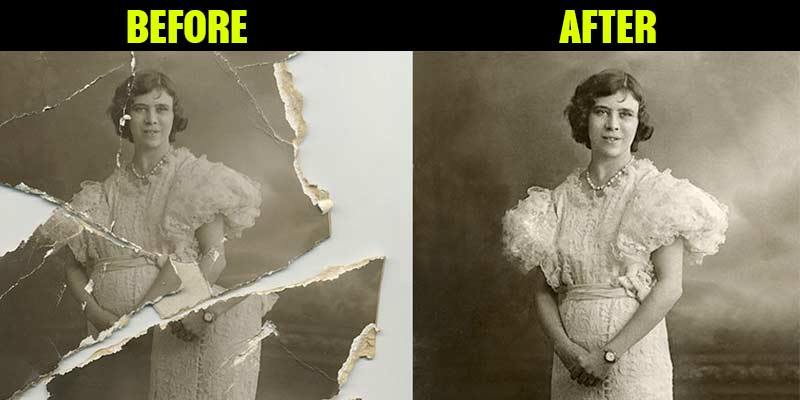 Traffic Sensing Technologies use the Video Image Processing System (VIPS). This is usually set up in multiple-lane roadways.The system shows a signal of ‘on’ and ‘off’ whenever a vehicle enters and exits the detection zone. This function involves Image capturing, Image processing, and a telecommunication system to produce the expected output. This also helps in reading the license plates of the vehicle while making processed data of the vehicle model, monitoring the speed, and much more. 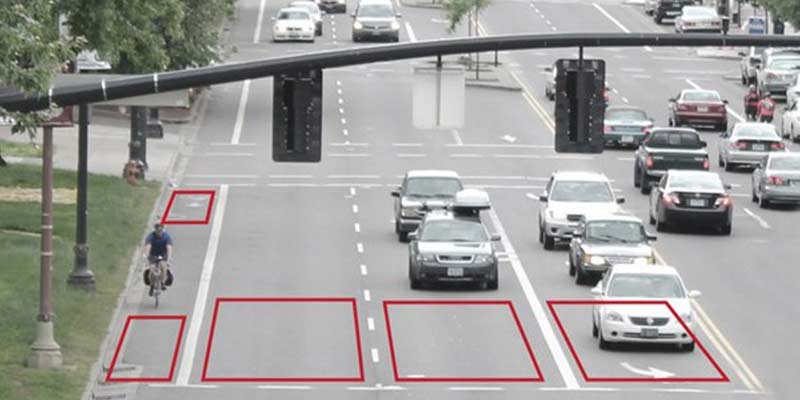 Image Processing in face detection uses certain computed algorithms to recognize a face in an image. It uses certain features of the face mostly the eyes and edges including the distance between the eyes, the shape of face, etc. The function is used in entertainment industries to detect faces in motion and in smartphones to secure their personal details. RGB, Thermal, EEG, and wearable inertial sensors are used to obtain the details.

Overlapping of other fields with Image Processing

An image input can give an output of either the same image or a description. When the output is a description, it is called Computer Vision. This can be spotted in self-driving cars, MRI scans, Parking occupancy detection, and others. If the output was also an image, it is called Digital Image Processing. This is used in computer-aided medical diagnosis, face detection, image restoration, etc. 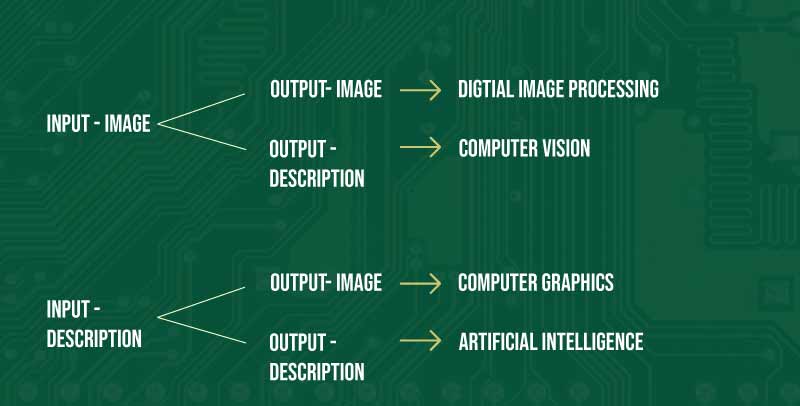 On the other side of the coin, if an input description gives an output of an image it is known as Computer Graphics. Its applications are widely recognized in the entertainment industry. If the same description input gives the output of a description, it results in Artificial Intelligence. This helps in personalized shopping, voice assistants, autonomous vehicles, etc. Artificial Intelligence is an interesting field to work and it provides you with a promising career. You can also check out the  AI Engineer Salary For Freshers before starting up your career.

In recent years, marketers have better understood consumers and how they are attracted to creative and attention-seeking posters and advertisement pictures. The images are the first impression a marketer could give for their product and it decides on how the product should be conceived by the consumers. A well-presented image takes charge of the emotions of consumers by installing a positive perception of the product leaving behind its flaws. Today’s marketing world understands the importance of listening to consumers’ social media feeds to suggest the best products to them. Artificial Intelligence and Machine learning are crucial in understanding the customers’ social media feeds. For example, you can use AI and Image Processing to analyze the photo of a celebrity shared on social media and take perks of the minor detailings of the brand they use without mentioning them in the caption. It helps digital marketers in multiple ways

Are you someone who spends way too much time on social media channels? Or Are you aspiring to become one of the social media influencers you follow on Instagram? Learn Digital Marketing Course in Chennai to understand to gain better marketing skills in this Internet era. Image processing has become one of the inexorable products of human necessities in this digital age. The complete future of marketing, entertainment, and education relies on technology. On a whole, the necessities of a human revolve around technology. This can now be a promising field from which you can make your living. Join Artificial Intelligence Course in Bangalore to begin your career in the field. It’s never late to start something new!