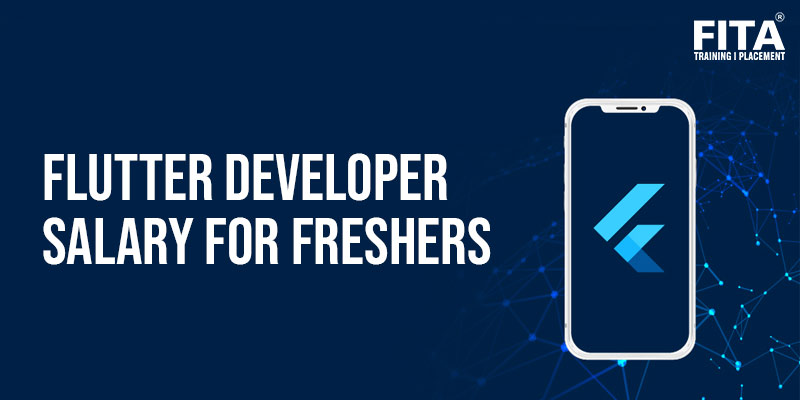 Flutter is the modern framework from which you can create mobile applications in simple ways. The language is easy to learn for beginners as there are more flutter developers in the industry. Let’s take a look at the Flutter Developer Salary in India for freshers. The role has a surplus demand though it is being filled by the tenders every now and then. The increasing demand offers young minds a promising career in the near future. Check out its significance in application development and the salary for Flutter Developer in India to make a wise decision in your career.

Flutter is Google’s portable UI toolkit for making beautiful, natively compiled mobile, web, and desktop apps from a single code base. Flutter works with code that already exists, which is free and open source. It is used by developers and organisations all over the world. It is different from most other ways to make mobile apps because it doesn’t use web browser technology or the widgets that come with each device. Flutter instead draws widgets with its own high-performance rendering engine.

Flutter is also different because only a thin layer of C/C++ code is used. Most of Flutter’s system, such as compositing, gestures, animation, framework, widgets, and so on, is written in Dart. This makes it easy for developers to read, change, replace, or get rid of something. This gives developers much control over the system and makes most of it easier to use.

Join Google Flutter Training in Chennai and learn to build your own mobile application! The course also offers you classes on the Dart programming language to strengthen your skills.

The Flutter Software Development Toolkit (SDK) is comprised of,

Flutter is becoming more popular recently with the efforts and commitment of Google to the framework. At the recent Google Conference with the launch of version 2.2, it was stated that almost 200,000 applications in the play store are made with the help of Flutter. The popularity of Flutter has been growing over the past few years and is likely to keep growing in the years to come.

With the growth of technology and every single thing in the daily activities of humans being digitalised, the need for applications had immense growth. The growth of smartphones in every nook and corner of a country is also another major reason for the high-scale demand for mobile applications.

Flutter gives designers a blank slate on which to build high-end user experiences. Flutter has been called one of the best design ideas of the last 10 years because it makes it easy to turn ideas into working code without having to make the compromises that most frameworks do. It also works well as a prototyping tool, and you can use CodePen to share your ideas with other people.

Flutter makes it possible for engineering, managers and businesses to bring together mobile, web, and desktop app developers into a single team that can build branded apps for multiple platforms from a single codebase. Flutter speeds up new features’ development and ensures that all customers are on the same release schedule. All of this contributes to the growing demand for Flutter and its developers in the market.

Flutter Developer Salary in India for Freshers can be increased by joining a Java Training in Bangalore at FITA Academy. Since Java is one of the most widely used programming languages, it is necessary to use the Flutter Software Development Toolkit. Below is a chart of salary for Flutter Developers based on different companies.

Joining Google Flutter Training in Bangalore might help you in making use of the increasing demand for mobile application developers in the industry. The demand would not be out of date in the near future as everything is being digitalised in this modern era.

Flutter Developer Salary based on Experience

The salary of any individual increases as their experience in the field increases. It is the reward for continued learning and the professionalism they gained through the years. Flutter Developer salary in India also varies depending on the individual’s experience in working with flutter. A graphical representation of Flutter’s salary structure is given below based on experience. 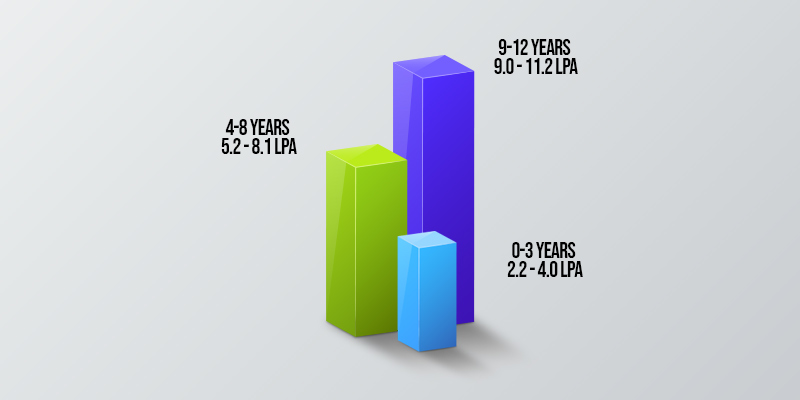 Basically, every cross-platform framework has a way for the target platforms to share the same code base. But Flutter is the only app framework that lets you share both the UI’s and UI’s code.

The “hot reload” feature of Flutter lets you see the changes almost immediately, without losing the application’s current state. And this is exactly what makes Flutter application development a lot faster because of how much faster it is now.

Also, the Flutter team has put a lot of work into making a wide range of widgets that are ready to use. Most of them are very easy to change, which will save you more time than any other framework. Flutter has a large set of Material and Cupertino widgets that perfectly mimic the behaviour of each design language. This is in addition to a large set of core layout widgets.

This one is pretty easy to figure out. The Flutter development framework works faster than the other options. Most of the time, making a Flutter app will take at least twice as few hours of work as making the same app for Android and iOS separately.  You can also upskill your knowledge in the development of the iPhone Operating System by joining the iOS Training in Chennai. The main reason is very easy to understand that you don’t have to write any platform-specific code to give your app the look you want. Flutter can be used to build any 2D user interface that doesn’t need to talk to a native app.

Most of the time, the performance of a Flutter app won’t be any different from that of a native app. It might even be better in situations with complex UI animations. Flutter doesn’t use any intermediate code representations or interpretations, which is different from how most cross-platform frameworks work. The Flutter application is built into the machine code, which eliminates any bugs that could happen during the interpretation process.

Flutter has a cross-platform rendering engine that works well and is fast. It uses Skia to draw itself on a canvas that the platform gives it. Because of the engine, UIs made with Flutter can run on almost any platform. To put it another way, you no longer have to change the user interface (UI) to move it to a different platform. This makes the development process a lot easier.

An application must run smoothly without any hindrance at the user-end. UI UX plays an important role in making that happen for every single application that we install today. Apart from learning mobile application development, joining UI UX Training in Bangalore might be an added advantage for the recruiter to select you.

Aside from the user interface, many real-world mobile apps use advanced OS-level features, such as getting GPS coordinates, communicating via Bluetooth, getting data from sensors, handling permissions, working with credentials, etc. Many of these can be added to a Flutter app through a Google-supported plugin that is ready to use.

Flutter makes it easy for native code on a platform and Dart code to talk to each other through platform channels. So, a Flutter app can do everything a native app can do, with just a little more work on the native side.

Flutter Developer Salary based on Location

Flutter Developer Salary in India for Freshers not only depends on the skills and experience an individual possesses. It also depends on the location of the company and the cost of living in that particular region. The difference in salary based on geographical location is given below for your reference. 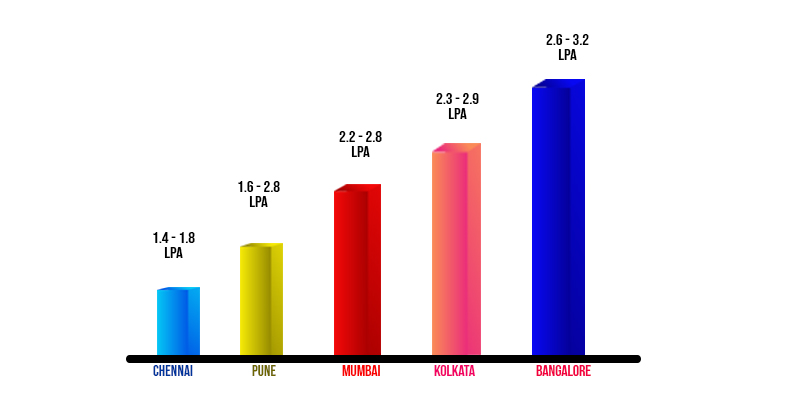 Prerequisites of a Flutter Developer

Before you start writing code in Flutter, you should be familiar with and have a lot of experience with Android application programming languages like Java, C, C#, C++, Lua, or Kotlin.On the other hand, to make a Flutter app that works on both iOS and other platforms, you need to know Swift well and have experience. If you know how to use these programming languages, you’ll be able to understand Flutter and how it works as a whole. Most IT companies that use Flutter hire people who used to work with Android or iOS because it’s easier to learn and use. You can now gain knowledge of Android by joining the Android Training in Chennai. The certification of this course might also help you in getting the desired job of Flutter Developer in your dream company.

Simple scripts in Flutter are written in Dart, a client-based programming language. Google also released the object-based programming language Dart. Skilled experts say that is similar to C or Java. On the other hand, Dart is used for web, server, desktop, and mobile. This makes it a flexible programming language that brings Flutter into the world of cross-platform compatibility. Most companies that hire Flutter developers will want them to know or have experience with Dart, and it’s very likely that one of the practical tasks during the interview will involve Dart.

Knowledge of Agile and Waterfall

The Agile Manifesto lists 12 principles that guide the frameworks and practices that make up agile methodologies. Agile software approaches differ from other types of methodologies in how they come up with solutions and do things.

Waterfall methodology is a life cycle that goes in a straight line and is thought to be simple and easy to understand and use. The waterfall was the first SDLC Model that was used to make software, and it is still the main method.

SQLite is an important part of many frameworks because it helps store data that stays around and loads it every time it’s needed. But SQLite has more benefits when used with Flutter. SQLite can be easily added to Flutter with the SQLite plugin, and it can be used to insert, read, update, and delete data.

But the main reason SQLite knowledge and practices are important in Flutter is that Flutter developers are there to help and there is a lot of information about how they work together. Flutter developers will eventually have to work with a lot of data, so knowing SQLite is important because it is one of the tools that can handle this.

Git is now an important tool for every developer, no matter their framework or programming language. Most of the time, Git is a tool and community for developers, and Flutter has the same things. Most developers start learning Git early on, and after a few months, it becomes an important part of their work that they can’t do without.

Recent Post: How Puppet vs Ansible Differs in DevOps