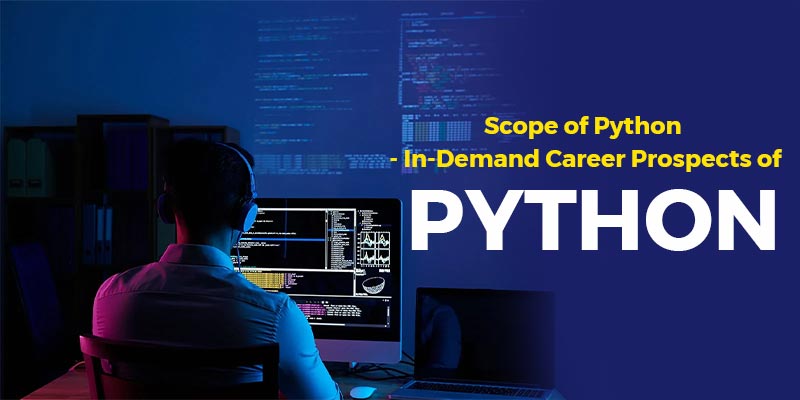 Python is widely popular, but it is gaining importance gradually. We all know Python is a powerful programming language with many outstanding features. The programming language, on the whole, benefits developers with the ease of programming. Many developers worldwide and businesses stick to Python to solve the problems they face with the technology. So today, let us know what the fantastic career opportunities it provides for its aspirants are.

Listed below are some of the famous well-known career prospects in Python, which are:

Python jobs are vast; therefore, Python aspirants have many domains to choose from to base their careers.

Learning Python Course in Chennai at FITA  Academy helps students to get a broad knowledge of the Python Programming language.

Data Analyst – Data Analyst is one of the most intriguing and the most exciting jobs in the Python domain. This job role expects Data Analysts to extract meaningful information from large sets of Data. Those willing to work as Data Analysts are expected to be skilled in Python Frameworks such as Pandas, SciPy, etc. Let us see some of the key responsibilities of Data Analysts.

India has lots of Python Job Opportunities for freshers as it is one of the powerful and leading programming languages.

FITA Academy provides the best Python Training in Chennai for students by helping them get trained under expert Python professionals.

The key responsibilities of the product managers are,

Enroll in our Python Online Course which teaches the Python Programming language in the best professional way.

Those who have attained expertise in the Python Programming language can also opt for teaching Python to Students. There are many schools, colleges, and training institutes that hire proficient Python Developers. This profession also has a good scope as there is always a demand for Python professionals who need to teach good Python.

Learn Python Online at FITA Academy if classroom sessions are not convenient for you.

Since Python is extensively used in the Banking sector to speed up their process, business schools have implemented learning the course along with Python. Therefore if you are eager to work in the finance field, learning Python will be a good choice.

FITA Academy conducts Python Training in Bangalore too and provides the same quality training through the best Python professionals.

Data Scientist –  A Data Scientist is responsible for obtaining, evaluating, and interpreting large amounts of data to find meaningful information from them. They employ different strategic methods such as Statistics, Programming, etc to evaluate the data that they have obtained. Some key responsibilities of Data scientists are,

Enrolling in the Python Course in Bangalore will enhance your overall knowledge of Python by exposing you to the real-time Python projects.

FITA Academy conducts the best Python Training in Coimbatore for students to help them gain comprehensive knowledge of the Python Programming language.

There are some other reasons that state the future scope of Python is good and strong.

These facts clearly show that Python has a bright scope in the future as it has impressive and dynamic features, commendable frameworks, and more to serve in the best way possible.

Enroll in our Python Course in Coimbatore and get skilled and competent in the Python programming language by getting trained under the best Python experts.

What is Python? A Brief History of Python!

Python has high-level data structures, dynamic typing, dynamic binding, and more interesting frameworks like Djangol Pyramid, Flask, Bottle, SciPy, Pandas, Ipython, Mumpy, and more to ease the work of Programmers. Python is still the ruling language in the current year with Java and JavaScript being the second and third most popular programming languages in the current trend. Python was first released on February 20, 1991, by Guido Van Rossum. Guido Van Rossum was the chief designer and developer of the Python Programming language until 12 July 2018. Later Python Core developers appointed a five-member “steering council” to lead the project.

The Python Scope is very bright as it is a leading programming language that is used in almost all advanced technologies.

Python is used in a variety of real-world applications

The following are some examples:

As we can see Python is used in various domains due to its nature of simplicity and being a beginner-friendly language.

Python and its uses

Why Choose Python among other programming languages?

Some Big MNCS using Python are:

And many more Small and Medium IT companies and many other sectors use Python in one or the other way.

Why is Python Popular for

1. Python is compatible with a variety of programming paradigms

2. Python comes with a large library and a set of tools

Python offers a large set of standard libraries and tools that improve the language’s general functionality and make it easier for programmers to develop code. The following are some of the most useful Python libraries and tools.

3. Python has a large and active community

This is why python is a popular programming language for web development. If you’re experiencing trouble building a Python program, you can ask your question directly to the Python community, and you’ll get a response with a solution. You’ll also find a lot of new ideas for python technology and updates to the versions.

Python’s code readability is far superior to that of other programming languages. For example, instead of curly brackets, it employs whitespace indentation to delimit the code block. Isn’t it fantastic?

5. Python has fewer lines of code than other programming languages

Now we have seen the importance of the Python Programming language in the IT world and the career prospects in Python. Thus learning Python is always beneficial as it will really enhance your career opportunities. Python is and will continue to be the powerful programming language so freshers and aspirants can confidently choose Python as their specialization and can have solid career growth.

Recent Post: How to Read News to Boost Your IELTS Reading Score