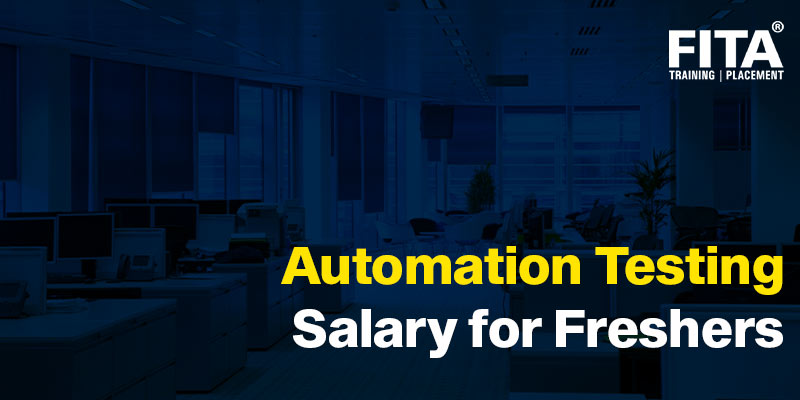 Every product you hold in your hands and every website or application that you scroll in a day has undergone several tests before hitting the market. Automation Testing salary in India for freshers is exciting! People working in the technology sectors would have been familiar with the software tests. They develop software and put it through numerous tests to get it right. This is a part of the production cycle and is indispensable for the outcome to be as good as the consumer expects. Automation testing is software testing another software. Wondering its possibilities? Let’s catch up with the Automation Testing knowledge from the scrap.

What is Automation Testing?

The term ‘Automation’ refers to a method of automating a manual process through the use of technology. The aim is to eliminate manual, monotonous, and tedious tasks. Automation Testing is the process of testing software and other products of technology to make sure they meet the demands of the consumers. Though these tests can be done manually, the company has greater benefits when it is automated.

In addition to entering test data into the system under test, the automation testing software also compares expected and actual outcomes by providing complete test reports. Software Test Automation necessitates considerable financial and human resources. Without eliminating the human labour the Automation Testing salary in India for freshers is well-bounded.

Software Testing is a set of several repeated test cycles which is performed for the successive development of the software. This can be easily carried out with the Automation Testing Software. The goal is to reduce the number of test cycles performed manually and not to eliminate manual labour. The automation software is written in C#, JavaScript, and Ruby programming languages by the Automation Developers. The Quality Assurance (QA) Automation Tester writes the test scripts for all the tests which are required to carry out the tests repeatedly. Learning Software Testing course in Bangalore might give you an expansive knowledge on this whole process.

Also, check the Software Tester Salary for Fresher, to decide which category you wish to focus on, in this domain. The domain has the most sought-after job that has vacancies on a huge scale in this fast-growing technological world.

Using automation technologies allows for more regular testing, which improves overall functionality. Software development cycles necessitate recurrent testing, typically of the same test.This is feasible with automation testing, allowing team members to focus on other tasks. It can also provide more accurate and consistent results than manual testing. It ensures whether the product is market-ready or ready to move on to the next stage of development. This affirmation encourages the team to keep growing.

Manually, it is challenging to test multilingual sites. Automation comes in aid in such situations and helps in developing user-friendly products all over the world. Another significant benefit of automation is running it overnight without human intervention and completing the test report. The advanced level establishes a Continuous Integration environment in which the new build is automatically tested after each code push. We can develop Jobs using CICD solutions like Jenkins that execute test cases when a form is deployed and email the test results to stakeholders.

All these benefits of Automation Testing lead to abundant job vacancies in the Software testing sector. This makes the Automation Testing salary for fresher attractive among the other job opportunities. The Software Testing Course in Chennai is yet another advantageous course that can fetch you a job in this field.

What and What Not To Be Taken for Automation

It is not possible to automate all testing simultaneously. As a result, you must first pick which tests to automate. Let’s consider the kind of tests that can benefit from automation and, as a result, should be automated:

There are specific tests that happen to be effective only by manual efforts. Though the software fails to perform these tasks, the Automation Testing salary for fresher remains unchanged. This is because of the development of numerous software in the market. The few tests that are hard to automate with any software include

Automation Testing Salary based on Location

Knowing the types of automation will help you choose the suitable test for the product created or developed by your team. The Automation Tests under Software Testing can be classified based on three parameters. They are

Learn more similar information in the Software Testing Interview Questions and Answers to easily crack the interview and get placed. The Automation Testing salary in India for freshers remains standard besides, the type of test or frame or tool that has been chosen to perform the test. The salary package for Automation Testing is comparatively higher than the salary package of any fresher who works in manual testing.

Automation Tests based on Types of Testing

Functional testing verifies each function/feature of the program and focuses on if the product performs based on the needs of the clients. You validate the actions you take in the software via functional testing. It can be done both manually and automatically. Testing a website’s login functionality is an example of functional testing.

Automation Tests based on Phases of Testing

Application Programming Interface (API) is the interface between database and UI. API testing examines the application’s end-to-end functioning. The method does not require keyboard inputs and outputs, and testers will not have access to the source code. Instead, the software is designed to make API calls to obtain the output, and the testers take note of the system/application response to ensure that it functions properly.

UI testing examines the validity of visual elements on the system’s interface, such as fields, buttons, labels, links, text fields, and pictures. For a better user experience, these elements must be presented correctly and function as intended. The application’s functionality in managing user actions, which are done via their keyboard, mouse, and other input devices, is also tested during UI testing. Its primary goal is to deliver a user-friendly interface and experience.

Automation Tests based on the Types of the Test

Smoke testing is also called Build Verification Test (BVT). It is carried out at the early stages of application testing. Smoke testing is performed whenever a new feature or capability is added to an existing build, and it serves as a checkpoint before moving on to the next level of testing.

I&T testing, string testing, and thread testing are all terms used to describe integration testing. Its purpose is to ensure that all of the application’s components are communicating properly. In other words, because software is made up of many smaller modules, testers arrange them logically and test them as a group in integration testing to identify weaknesses while maintaining the interaction between the software modules.

Regression testing is used to ensure that the produced and tested software continues to function correctly after modifications have been made. Bug fixes, configuration tweaks, and program enhancements are all possible changes. This is accomplished by re-running the application’s functional and non-functional tests.

As a tester, you don’t want to be responsible for data breaches, lost revenue, or a bad reputation as a result of unauthorized access. Security testing, which uncovers the underlying dangerous threads, vulnerabilities, threats, malware, and other dangers in the software program, is performed to avert such incidents and prevent hostile intrusion. Security testing enables you to identify all flaws and vulnerabilities in the system’s security, which you may address quickly by devising appropriate solutions.

Even if your product is subjected to a severe workload, it must function without latency. So, before releasing your product to the public, you should test it for responsiveness, speed, stability, dependability, and robustness under a specific workload.

The final level of testing before a product is released to the market is the Acceptance Test. It is done to ensure that all needs of the user, business, and customer requests are met to assess whether or not the product is ready for delivery.

To gain extensive knowledge in the types of software and automation tests, check out the Software Testing Tutorial now! Learn everything about software testing and build a strong career in the field of web development.

Automation Testing Salary based on Experience

Automation Testing is a promising career in the future. Since automation reduces time, labour and cost, there would be a large number of companies installing automation in their test processes. The structure growth of the salary package for an automation tester is given below. 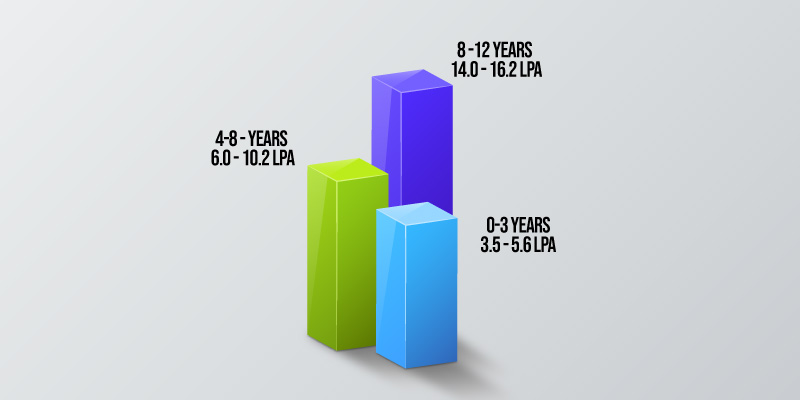 Automation tools should be chosen based on the type of test and the product you have developed. Below are some of the widely used automation tools,

Automation Testing Salary based on Skills and Tools

Learning any one of the programming languages could be beneficial in writing the automation software. This can open up Automation Developer job opportunities in the IT sector. Join Java Training in Chennai to get trained as a professional Automation Developer.

The magnitude of Python in developing websites, software, and task automation are unimaginable. Join Python Training in Bangalore to become a master in both roles with rewarding promotions and hikes. Industrial Automation Testing salary for fresher can be increased with the knowledge of working in the popular automation tools like Selenium, SoapUI, Ranorex, Appium, etc.

The future entirely depends upon the technology in this Internet era. This means more production of technological gadgets and the development of numerous websites and applications. This emphasizes the mass demand for Automation Testing. In addition, learn Selenium Training in Chennai to upgrade the Automation Testing salary for fresher. Make a choice that is wise!

Recent Post: How Effective Leadership In Management Allows An Organization To Prosper And Grow