FITA Academy’s Java Training in Velachery is a precise training program conducted for Java aspirants as well as programming enthusiasts to obtain comprehensive and extensive knowledge of the Java Programming Language. The training program is inclusive of imparting thorough and practical knowledge of the language as well. The training includes the teaching of basic, advanced, and core concepts of the language. By enrolling in our training program, students not only get certified but also have the advantage of utilizing our placement support to get placed in top MNCs as well as in SMBs. FITA Academy’s Java Course in Velachery is delivered by industry professionals who are proficient and skilled in the Java Programming Language. 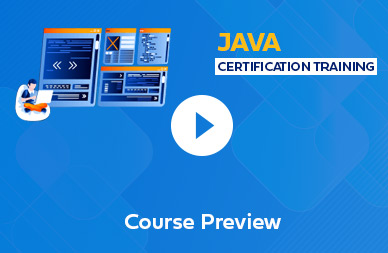 Course Highlights & Why Java Training in Velachery at FITA Academy?

About Java Certification Course in Velachery at FITA Academy

The main aim of the Java Certification Course is to make students attain expertise in the Java programming language. To help them attain expertise we train students extensively by teaching them the significant features and important concepts of Java. Some of the essential concepts we teach here are Java features, Object-Oriented Programming principles, basic concepts like Classes, Inheritance, Objects, Interfaces, Polymorphism, Java APIs, Java Applets, Networking, and Multithreaded applications, and Java Database Connectivity (JDBC). The advantage of getting certified in the Java Programming language is the wide pool of opportunities for Java programmers present in the IT sector. Also, Java is the predominant language used in Mobile Application Development, Web Development, Big Data, and more presently and so getting certified in the Java language paves way for a candidate to choose any of the many domains to get themself employed. Moreover, the salary of Java programmers globally is $125,000 per annum. Apart from coding aspirants, the Java Certification Course can be attended by Software Developers, Web Designers, and Engineering Graduates. There are no prerequisites necessary to attend the Java Certification but basic knowledge in programming and C# language will be an added advantage. FITA Academy is the best Java Training Institute in Velachery as we conduct the best Java Classes for students to enhance their knowledge of the Java Programming language as well as equip them with the best practical knowledge of Java.

Java is a Programming language as well as a Software Platform released by Sun Microsystems in 1995. Initially, it was designed to build a television set-top box. But today Java has become the backbone of the IT industry and is still proving to be the efficient programming language to design and build the latest technologies. Java is the one programming language that has become the sole reason in today’s world for running millions of mobile devices across the world. More than 56 billion mobile devices run because of Java and over 10 million developers use Java as their preferred language for web development, application development, and more. The most famous and the most used Operating System – Android is developed or written using Java. Some of the applications of Java are Android Applications, Enterprise Software, Computing Applications, Big Data Analytics, and used in Server-side technologies like Apache, JBoss, GlassFish, etc. Some of the other reasons to choose to learn the Java programming language are first, it is beginner-friendly and has a competitive edge compared to other languages. It is because it provides a lot of career opportunities for freshers as well as experienced professionals.

Second, the latest version of Java is Java 17 or JDK 17 and it has a lot of updated features for the programmers to build cutting-edge mobile applications. Some of the other significant features of Java are Code portability and Versatility, Open-source library support, Community Support, Development tools like IntelliJ, Eclipse, Android Studio, Netbeans, etc. Some of the sectors that are dependent on the Java programming language are the Banking Sector, Information Technology Sector, Software Development Sector, Stock Markets, Financial Sector, Social Media, and much more. Moving on to the job opportunities, there is a high demand for Java developers even in 2021. In fact, 2021 is termed as the year of Java developers and it is a boosting factor for all Java aspirants to trust Java and continue to learn it. There is a good opportunity for Java aspirants abroad like the US as the country gives more opportunities for Java learners and the Java Developer profession has acquired the number one job position in the US with a job satisfaction rating of 4.2 out of 5. Some of the jobs that can be obtained after completing the Java Certification are Java Developer, Java Architect, Java Web Developer, Java Android Developer, Java EE Developer, etc. Let us discuss the salaries of Java professionals in India. The salary of an entry-level professional is Rs. 4,69,729 per annum. The salary of a mid-level professional is Rs. 8,93,933 per annum. The salary of an experienced professional is Rs. 1,00,000 per annum. Join FITA Academy’s Java Training in Velachery to get trained under the best and experienced Java industry experts.

I attended Java Training in Velachery at FITA Academy. I had a good learning experience through the training program. My trainer conducted the classes very precisely so that freshers like me can grasp the concepts easily. She taught the concepts in a practical manner which was very easy to understand. Java was taught from the basics. The coding classes were interesting as she taught each step clearly and also explained them very neatly. It was a one-of-a-kind learning experience for me. Freshers can confidently join the training program as they teach the concepts comprehensively and broadly.

It was a good decision to attend FITA Academy’s Java Course in Velachery. The training program was full of practical classes and thus it was easy to understand how to code in Java. The programming language was taught from the basics and it was helpful to have a strong foundation in the language. Advanced concepts and important concepts were taken practically. The latest developments in the programming language were also taught extensively. I am quite satisfied with the training program. Thanks to FITA Academy for conducting a valuable training program and training students efficiently.

When I was searching for a good institute to learn the Java programming language, I found FITA Academy online. The Academy had good reviews for the Course. So I joined FITA Academy to learn the Java Course in Velachery. It was the best training program I joined for the Java programming language. The Java training program was completely taught through practical classes and so it was easy to understand the language in an easy manner. Often tests were conducted to assess our knowledge. Projects were given and our trainer completely assisted us in successfully completing them. Giving projects and assignments was helpful in enhancing our knowledge of the Java language.

I had a good learning experience by joining FITA Academy’s Java Training in Velachery. Java’s basics were taught and so it was easy to gain a good basic knowledge of the Java programming language. Advanced concepts and core concepts were also taught in a practical manner. Now I can code the programming language by myself. Assignments and Projects were given to enhance our knowledge of the language. I recommend FITA Academy for all the freshers who want to gain proficient knowledge in the language. Thanks to FITA Academy and my trainer for the valuable training and support.

What is the eligibility criteria set by FITA Academy for students to join its Java Training in Velachery?

There are no eligibility criteria set by FITA Academy for students to join its Java Training in Velachery. Students or working professionals of any educational background can join FITA Academy and learn its course Java Course in Velachery.

Why should I join FITA Academy to learn its course Java Course in Velachery?

Will FITA Academy provides placement support for students enrolling in its Java Training in Velachery?

How to enroll myself in FITA Academy for learning the Java Course in Velachery?

What are the training options provided by FITA Academy for learning the Java Course in Velachery?

FITA Academy provides both Weekdays and Weekends Classes for students to learn the Java Course in Velachery. Students can choose either one of them to learn at their convenience.

Java is Object-oriented, platform-independent and a class-based language. Even though it was launched in 1995, it is still the most used programming language in 2021 for Web Development, Application Development and also used in many advanced technologies such as Big Data, Artificial Intelligence, Serverless Architecture, Spring Framework, Cloud-Based Models, SaaS and PaaS and Remote Access Solutions.

Java remains the popular programming language in the Software Industry due to its simple syntax and codes. Due to its simplicity, it is used by millions of developers across the globe. It has rich community support and has many significant features and its latest versions are updated every year. Learning the Java programming language has many benefits for Java aspirants from Career establishment, Career advancement to higher salary packages.

Java is a simple and easy language to learn as it has a simple syntax and programming structure. To learn the language faster, students can join FITA Academy as we provide the best Java Course in Velachery for students to help them attain proficiency in it.

Java has rich community support as there are more online communities and forums to help beginners in the language to learn more about Java. The Online community has all kinds of Java developers ranging from Beginner, Advanced to Expert levels who are helpful for Java Beginners. Some of the Online Communities and Forums are Stack Overflow, Java Forums, etc.

Java has some significant development tools like Eclipse, Netbeans, IntelliJ Idea which have paved the way for the success of Java. These IDEs provide many supporting factors like debugging, syntax highlighting, code completion, language support, automated refactoring, etc that helps Java developers to code in Java faster and easier.

Java has been made as an Open-source language under the Oracle Binary Code License ( BCL) which means it can be sued for free for development purposes. For commercial purposes, a small fee is charged.

Java provides good documentation support for the Java developers through its Javadoc which is the document generator for Java.

Java is a versatile programming language as it can be implemented on many platforms. It possesses many significant features such as dynamic coding, multiple security features, platform-independent characteristics, network-centric designing, etc. Join FITA Academy’s Java Training in Velachery to experience first-hand training from the industry’s best and proficient trainers to gain high-end knowledge of Java Programming language.